See what we can learn about goats from our newest video!
Go to the video page.

Our prodigal partridge has returned. She “flew the coop” over a month ago and we’ve worried about her out in the wild with the owls and coyotes. Today she came home and immediately went to greet her friends in the aviary, Clarissa, Burdock, and Kate. Clarissa has been lonely since her departure and was happy to see her. So are we.

In the frigid temperatures of February, Reginald, a young rooster, escaped from a live meat market in Yonkers but quickly found his way to Safe Haven.  Reggie is a very lucky boy!  Since roosters can’t lay eggs and there is little desire for their meat, most roosters born on factory farms are separated from female chicks and suffocated or thrown into a grinder within a few days of life.  A few end up on small farms or in live markets where their days are numbered.  Those lucky enough to be rescued often have trouble finding a permanent home.  Reggie will be an ambassador for farmed animals everywhere whose survival depends solely on their economic value.  Here at Safe Haven, Reggie will have the chance to live the life he was meant to have, and we are thrilled to be able to be a part of it. 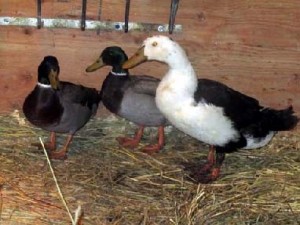 Three ducks have joined the Safe Haven family. Two are handsome mallards who probably escaped with a bunch of pals from a gun club over the hill. If the weather had been better, they might have made it on their own, but being raised in crowded conditions on unnatural food instead of having a chance to learn from their parents how to forage and protect themselves, they didn’t have much chance. One took  refuge in a culvert nearby and was rescued by a compassionate neighbor. The other was found under the body of a truck in a nearby driveway sheltering himself from the snow. A third duck was handed over by someone who raises ducks to be herded by young sheep dogs buffing up their skills.

Our three ducks, named Stan, Oliver, and Lionel, eagerly greeted each other and explored their winter home, a large indoor space with clean warm straw and a few small discarded Christmas trees to play behind. In the spring they will move to new quarters with access to the outdoors and a swimming pool.

Ducks are raised in crowded cages on factory farms for meat and killed in unbelievably cruel ways. Many are force fed through metal tubes jammed down their throats until their livers become huge with fat. The ducks are killed and their livers ground up to make fois gras, a so-called delicacy that humans choose to eat without concern for the animals from which it is made. Other wild type ducks, like Mallards, are often raised on factory farms, unable to learn how to live in the wild, and then shipped to gun clubs where they are released to be shot by hunters hiding nearby in duck blinds. Our ducks will serve as ambassadors for the millions who suffer and die too soon and hopefully will turn the hearts and minds of those who meet them.

Sheep Saved in Nick of Time

One day in mid-January, Safe Haven heard about a 5-year- old female sheep who was headed for slaughter. The sheep had failed to produce live offspring for two consecutive years, so she was going to be sold for meat. However, the owner was happy to relinquish the sheep to Safe Haven.

The next day, Safe Haven founders Ellen and Bill picked up the sheep, Missy, while caretakers Mary and Karen prepared to welcome her to her new home. We hoped that Missy would enjoy living with our older sheep, Claria. Claria lost her friend Maggie to cancer in the fall and seemed lonely.

Missy and Claria quickly became friends. They travel about the farm together, calling out to each other whenever they become separated. As each snowfall brings subtle changes to the farm, they eagerly explore it together. We hope visitors will enjoy watching them. Missy is an ambassador for farm animals everywhere whose lives are ended when they no longer have any economic value. At Safe Haven, Missy is already making friends, and she will enjoy the peace and happiness she deserves.

Little Chicken Rescued from Near Death in Brooklyn

Lucy was rescued in early September by two compassionate graduate students. She had been packed into a crate with other chickens awaiting a Kaporos ritual in Brooklyn and had numerous cuts and injuries and an infected foot. The young men took her home and nursed her back to health in their apartment, but the landlord threatened to not renew their lease if the students didn’t get the chicken out of the apartment. Safe Haven came to the rescue, and on November 1, Lucy was welcomed with open arms by owners Bill and Ellen and caretakers Karen and Mary.

Despite her orthopedic problems, Lucy has flourished at Safe Haven. She can’t do everything that she wishes—her legs are too twisted to roost well—but she enjoys foraging about and resting with our rooster and another hen.

Kaporos, or chicken swinging, is a custom among a few Orthodox Jewish sects, dating back to the Middle Ages. Practitioners swing chickens by their legs or their wings over their heads to transfer their sins onto the bird. During the ritual, the chickens cry out in terror and pain as their tiny bones break. United Poultry Concerns (www.upc-online.org) has helped draw attention on this cruel ritual and is working with a group of dedicated New York City activists, including members of the Orthodox Jewish communities, to end the practice (see www.endchickensaskaporos.com).

The ritual is cruel, but it is no crueler than the standard treatment of chickens on factory farms in the U.S. For more information, please see the United Poultry Concerns website above, or read books by Peter Singer, John Robbins, and others on factory farming. Click on the videos tab and select the video “Rescued Chickens” to see the hens on our farm enjoying life as they were meant to. 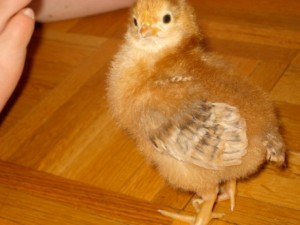 Safe Haven is honored to welcome little Roly Poly to our family. Roly was saved from certain death by a kind 12-year old who was distressed that his teacher was about to throw out fertilized eggs purchased for a class project. After spending her first month in an apartment in Brooklyn, NY, Roly came to Safe Haven where she has had her first taste of the outdoors and endeared herself to her caregivers. Welcome, Roly Poly, we are glad to have you. 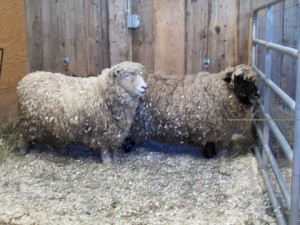 When two of his 4 sheep died, a nearby farmer gave the remaining two to Safe Haven. Shy, malnourished, and arthritic when they arrived, Maggie and Claria quickly regained their health and energy. Welcome Maggie and Claria! 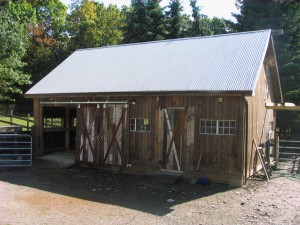 We are proud to announce that our new barn is finally complete and totally awesome! This barn gives Safe Haven the opportunity to combine animal rescue with other issues we care about, like social and environmental responsibility.

Nearly 99% of the lumber bed for our new barn came from an old dairy barn that was torn down to make way for a new building, greatly reducing waste put into landfills that are often found in low-income areas. Every piece of lumber salvaged meant one less tree that needed to be cut from rapidly dwindling forests and helped reduce the waste put into landfills.

Now this barn wouldn’t quite be a barn until it had some animal residents keeping it warm. To the rescue were our new goat residents Isadora and Duncan as well as our rested and recuperated Manhattan chickens. They have been busy exploring the different spaces and enjoying the good life. 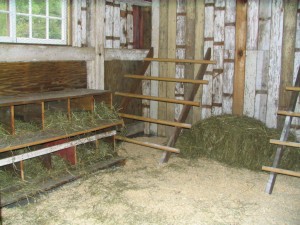 Safe Haven proudly welcomes Isadora and Duncan, two brave goats found wandering the Hutchinson Parkway after escaping from Spanish Harlem. They were likely going to be sacrificed as a part of Santeria rituals. 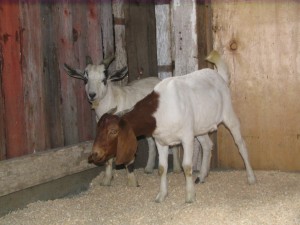 All that matters now is that they are safe and happy in their new home. They are having fun jumping on the rocks and exploring with each other, and making friends with our other sheep and goats. They also have the honor of being the first residents of our newly completed barn! 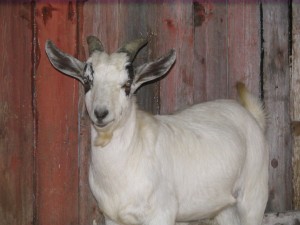 We are grateful to have the pleasure to see them grow and develop into wonderful ambassadors for their species and for all farm animals, free from pain and suffering. 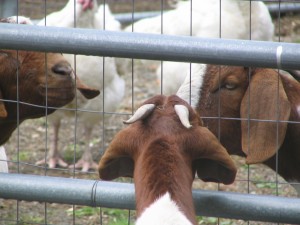 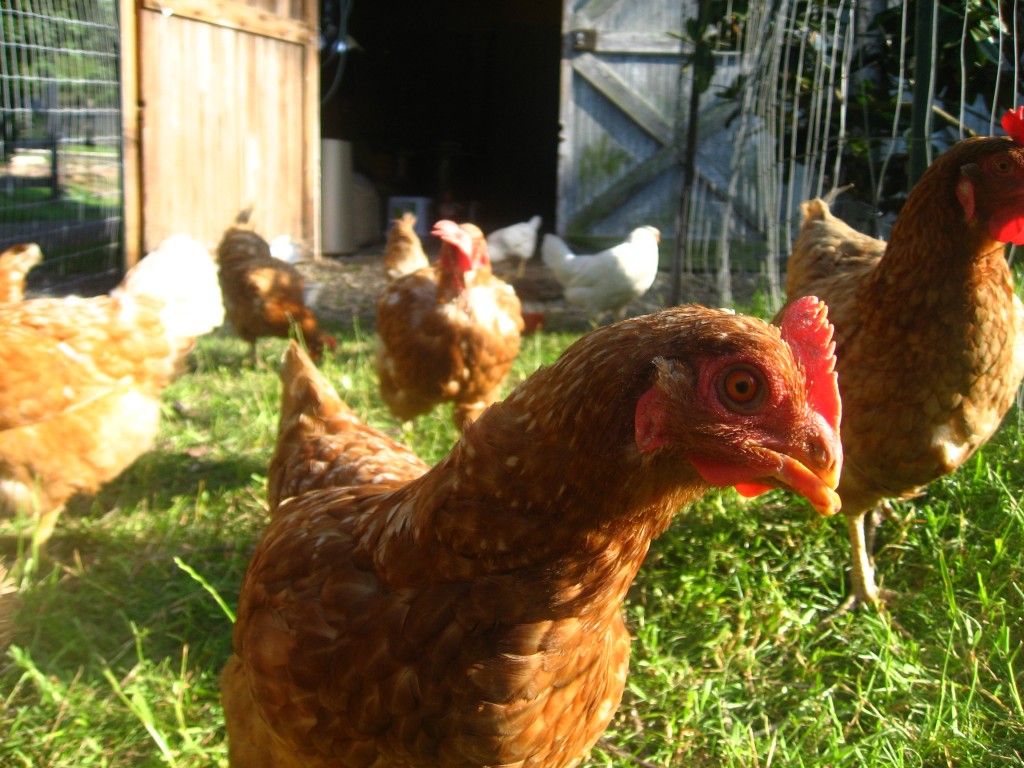 Safe Haven welcomes 19 new chickens into the family. Rescued from a parking lot in Manhattan, Lucy (pictured above) and her friends finally have a safe place to call home. Chickens’ personalities are as diverse as humans’, and this gang is no different. Their personalities range from curious to timid to down right bossy. So far they are a joy to have around, and we look forward to getting to know them all. Come and meet our new friends!