Deborah Schwartz Posted on January 17, 2018 Posted in Ethics of animal use 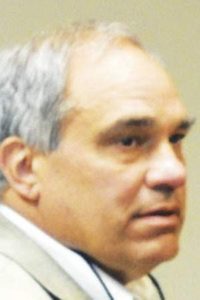 Bill Crain, an avid animal rights activist who teaches psychology at the City University of New York, has made quite a stir — both good and bad — protesting against the state’s bear hunt since its reinstatement in 2003.

Police have dubbed him a “gentlemanly” protester, but he has consistently been arrested for civil disobedience every year for breaking the law by stepping outside of the designated protest area and toward a bear weigh-in station where hunters check in bears at the Whittingham Wildlife Management Area in Fredon.

After serving a jail term last year, Crain is again behind bars serving a 15-day sentence in the Sussex County Jail after being arrested in October 2017 for the eighth time.

PETA — an acronym for People for the Ethical Treatment of Animals — has presented him with its “Hero to Animals” award for standing up for what he believes, regardless of his punishment.

Prior to starting his jail term, Crain, 74, received a letter of recognition from PETA’s president and a framed certificate that “recognizes and commends” him “for risking his personal freedom to speak out against the cruel New Jersey bear hunt.”

The certificate adds, “May this act of compassion and bravery inspire others to speak up for animals.”

Crain, who has taught psychology for 47 years, lives on an animal sanctuary with his wife, Ellen, in Poughquag, N.Y., and has taken in abused or abandoned animals, including goats, sheep, chickens, turkeys, pigs and other animals.

In a press release, PETA Senior Vice President of Communications Lisa Lange called Crain a “hero to all animals,” thanking the “kind protestor” for his tireless efforts.

“(He puts) his own personal freedom on the line to speak out against the slaughter of New Jersey’s black bears,” Lange said. “Kind people everywhere are celebrating the coming end of this cruel hunt.”

Crain is expected to be released from jail on Jan. 15, a day short of incoming Gov. Phil Murphy’s swearing in. It might be the last time Crain will be in jail since Murphy has pledged to place a moratorium on the hunt.

Crain previously told the New Jersey Herald that black bears, like humans, “have feelings and personalities,” and has quoted numerous activists and their beliefs in his speeches, including Martin Luther King Jr. and Mahatma Gandhi.

The motto of PETA, which claims to be the world’s largest non-profit animal rights organization, is: “Animals are not ours to eat, wear, experiment on, use for entertainment, or abuse in any other way.”

Dan Carron, PETA spokesman, said that although there is no set time the awards are handed out, dozens are given to organizations and people yearly when PETA recognizes them for their “extraordinary actions” when it comes to protecting animals.

Carron said PETA has become very familiar with Crain and his wife’s work at their sanctuary over the years and closely followed media reports of his protests at the bear hunts.

It was after he was sentenced to his second jail term that PETA chose to honor him after they noticed he was “willing to take an action and was willing to risk his freedom and safety” for animals.

Although Crain is the first 2018 recipient of the award, other recipients over the past year have included actress-entrepreneur Shilpa Shetty Kundra, who has spoken out against the cruelty in circuses; Zareen Khan, for rescuing a cat from the streets; Rani Makerji, for helping a dog in distress on the set of her film; and Claudine Erlandson, who protests outside KFC and McDonald’s every week in her hometown as part of PETA’s campaign to get both companies to stop allegedly scalding chickens to death.