Goats are friendly and affectionate animals. They make life-time friendships and are very family-oriented. They enjoy spending time with other goats, but will also approach human visitors in a curious and friendly fashion. 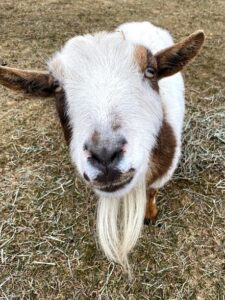 Astro came to our sanctuary in 2013 at the age of 3.  He arrived with his two friends, Violet and Daisy.  He is a Nigerian Dwarf goat which is a breed commonly purchased as pets because of their small stature.  Sadly, his family decided to move out of state and had no room for their 3 goats.  They could not find anyone willing to take them and the next step was to euthanize them.

Safe Haven heard the news just in time and brought Astro and his friends home to Safe Haven where they could live happily and peacefully for the rest of their lives.   Astro is a shy little boy but he loves to play in the pasture with the bigger goats.  Over the years, he has slowly come out of his shell and enjoys the TLC he receives from his human friends. 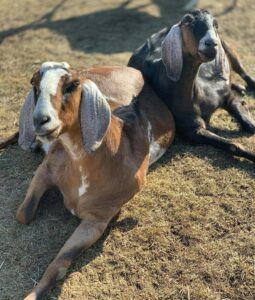 Baelfire and Firefly were born on a nearby farm and raised as 4H projects by 2 children.  When it was time to send them to slaughter, the children objected so they were moved to a farm where they lived outside in a small pen with little shelter for 2 years.  They only had human contact once a day at feeding time.  Safe Haven was contacted when the family no longer wanted them and couldn’t find anyone willing to care for them.  We welcomed them to the sanctuary in November of 2019.  Despite having little human or goat contact in their 2 years of life, they are very friendly.  Baelfire and Firefly are lively and energetic and love climbing hills and playing on the goat jungle gym in one of our paddocks.  At Safe Haven, they will never be lonely or neglected again. 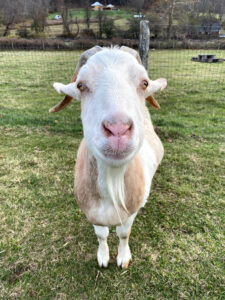 In July of 2014, Bessie is a dairy goat who was rescued from a backyard in Coney Island, NY along with her son Milo. They were being kept illegally and facing slaughter. Typically, male kids are slaughtered since they can’t produce milk and are an expense to keep. Bessie and Milo were seized by NYC Animal Control, and Safe Haven welcomed them with open arms. Bessie is a petite and sweet goat. She is gentle in nature and a phenomenal mom. Sadly, Milo passed away in June of 2021. We are grateful we had the privilege to care for Bessie’s incredibly gentle boy for 7 years. Bessie is now the adoptive mother of two baby goats named Max and Tyler who arrived in the Summer of 2021. She provides them with the maternal nurturing they crave and a new family has formed. 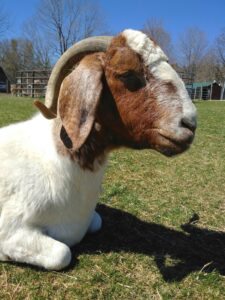 Boomer was born here at Safe Haven. He looks very much like his mom, Matilda. He has long ears and a white streak down his face. His mom was pregnant when she was rescued from a live market in the Bronx where she and Boomer would have been destined for slaughter.

At our sanctuary, Boomer enjoys his days exploring the pasture with his mother living the free and happy life he deserves. 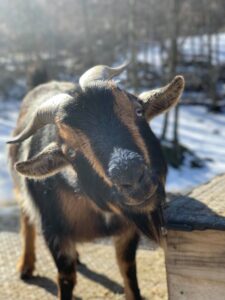 Cesar was found as a baby goat wandering the streets of the Bronx. He was rescued by two compassionate NYC police officers. Covered with candle wax, he most likely escaped a sacrificial ritual. Sick and thin when he arrived, Cesar has grown into a handsome, inquisitive little goat.

He spends his days exploring the farm. He is very friendly and eager to welcome you to Safe Haven. 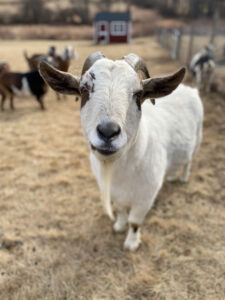 Duncan is a pygmy goat who was transferred to Safe Haven along with his friend Isadora after their daring escape from a truck in the Bronx. They were found at the intersection of the Hutchinson River Parkway and I-95 South. Duncan is very outgoing and spunky. Duncan is very bold and everyone knows he is “in charge”.  He especially enjoys engaging in playful interactions with his friend Milo. 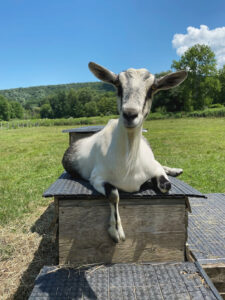 Lilah lived with Nellie in an illegal backyard goat farm in a nearby town and despite being no more than 2 years old, she had already been pregnant more than once.  She was very thin and had parasites and hooves that hadn’t been trimmed in a long time.  Lilah was shy when she first arrived, but with loving care from her human caretakers, she quickly warmed up and looked forward to human attention.

The vet and hoof trimmer came to Safe Haven soon after this sweet goat and her friend Nellie arrived to provide the proper attention to their health needs.  With good food, excellent care, and a warm bed to snuggle in during the winter months, Lilah will never have another worry for the rest of her life. 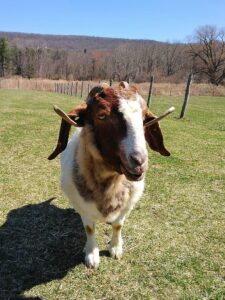 Matilda is one of the first animals to join our farm sanctuary back in 2008.  She is a Boer goat and was rescued from a live meat market in the Bronx, where she had been kept in a crowded pen awaiting slaughter. She was very sick upon her arrival at the farm, infested with parasites, and had contracted a viral illness.

We later found out that she had been impregnated while on the way to slaughter, so her unborn baby would have been killed along with her if she had been chosen by a customer. Even after arriving safely at the farm, it took her awhile to trust people. After evaluation and treatment by the vet, she received gentle loving care by the Safe Haven caretakers and delicious, healthy food for the first time.  She gave birth to her son Boomer just a few months later.  At Safe Haven, Matilda and her son are surrounded by love and continue to live the free and happy lives they deserve.  With lots of gentle care, Mattie gradually lost her fear of humans. 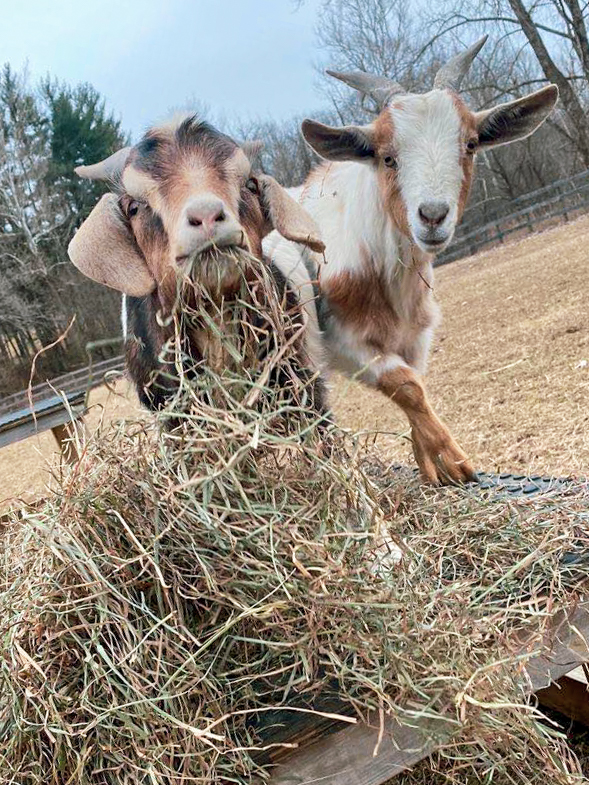 These two precious baby goats were found in a filthy backyard goat slaughterhouse in New Jersey.  Their mother had been sent to slaughter and they were next in line to be sold to customers who slaughter young animals as part of religious rituals.  Because several of the young goats were sick and could not be sold, the man at the slaughterhouse reached out to a nearby sanctuary.  Max and Tyler were the first to be removed from the yard and were transported to Safe Haven in June of 2021.  These two little ones were understandably quite nervous to be in a new environment and away from their mamas.  They were so afraid of people that they hid in the corner of their stall and would not even take bottles of kid milk.  We provided them with nutritious goat food and hay which they happily ate and enjoyed and they also took a few licks of goat mineral – easing our concerns that they would not drink milk.  They are gradually becoming more comfortable with people as our caretakers show them patience and kindness and treat them with a gentle touch.  Max and Tyler are Nigerian Dwarf goats.   Max is friendly and protective of Tyler who tends to be on the shy side.  Tyler follows Max’s lead and sometimes hides behind him for a sense of security.  They are deeply bonded and they are snuggle buddies! 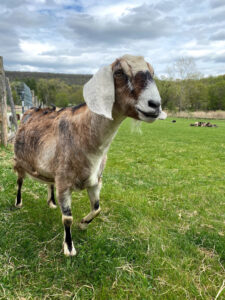 Nellie is a sweet Nubian goat with long floppy ears and a soft mouth who loves to nuzzle you and nibble at your pockets hoping for a piece of apple or some goat treats.  She was rescued at the last minute from an illegal small goat farm in a neighboring town after having her babies taken away from her one after the other and sold for meat.  She was facing a cold winter with little protection from the elements and had no hay or water nearby.

We were thrilled to be able to offer her a lifelong home with attention to her medical problems and the promise of a cozy warm place to sleep in the winter and lots of green grass and sunny pastures in the summer.