Americans seem to love birds. Many buy bird-feeders to attract birds to their home; others join bird-watching clubs and participate in bird-counting efforts. Despite this fascination, we tend not to consider the value of the chickens we eat, who are arguably the most abused animals on the planet.

Domestic chickens are the same species as Red Burmese jungle fowl found in Southeast Asia. In their natural habitat, chickens:

Scientists who study chickens know that they communicate with unique calls to specify alarm and the location of predators. Their cognitive capacity is greater than that of small children; they even like to watch videos!

Of course, the chickens we use for food do not have the luxury of these natural behaviors.

Did you know about the routine torture and slaughter of chickens?

Chicks allowed to live more than one day are “de-beaked.” This means their sensitive beaks are sheared off in a heat machine; no, this is not like clipping your fingernails, it is more like cutting off your lips. Chicken’s beaks are more sensitive than your fingertips.

The Humane Slaughter Act of 1958 does not cover poultry, so even the very minimal protection offered cattle, calves, horses, mules, sheep, swine does not apply to poultry.

Of course, no one wants to think they are causing the suffering of sentient beings, so many consumers choose to pay more money for artisanal, free-range, organic-labeled poultry flesh. The reality is that all of these animals go to the same slaughter houses and undercover investigations have shown that the daily lives of these birds are scarcely better than factory-farmed birds [McWilliams].

“Broiler” hens are baby chickens grown for their flesh to be consumed by humans. These hens live in large sheds containing up to 30,000 birds. The floors are covered with manure and excrement and the ammonia fumes make it difficult to breathe (the humans who go into these horrible places wear masks). Disease is rampant: Salmonella and Campylobacter bacteria thrive here and remain in the cooked flesh of chickens consumed by humans.

These sheds are cleaned out about once every four years, resulting in a toxic mess that has to be stored somewhere. Meanwhile, generations of chickens live on top of all the waste produced by previous generations. Undercover photos show birds whose feathers have been burned off by the ammonia on the floors of these sheds.

Broiler hens are fed hormones to make them grow fast; this means we are eating baby chickens who have been fed a diet to promote their growth in the minimum amount of time. This is equivalent to a 2 year old child weighing 349 pounds! Of course, this rapid growth means legs too weak to hold their weight, chronic joint pain and broken bones [Joy, pp. 53 – 60].

Once big enough, these broiler chickens are grabbed by their legs, carried upside down, and stuffed into transport trucks. They may travel up to 12 hours to slaughter houses, without food and water, through all extremes of weather.

Here is what happens at the slaughter house:

At the slaughterhouse, after being held in the trucks for 1 to 12 hours, chickens raised for meat are torn from the cages and hung upside down on a movable rack. As they move towards the killing knife, they are dragged through an electric current that paralyzes them but does not render them unconscious or pain-free. Millions of birds are alive, conscious and breathing not only as their throats are cut but afterwards, when their bodies are plunged into scalding water to remove their feathers. In the scalder “the chickens scream, kick, and their eyeballs pop out of their heads.” The industry calls these birds “redskins” – birds who were scalded while they were still alive. 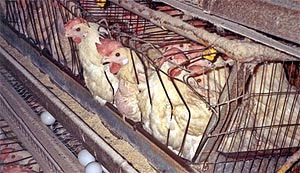 Take a look at the image to the left: is shows the life of typical laying hens, who are slaughtered at about 12 months of age, after they have exhausted themselves producing an abnormally large number of eggs for human consumption. Yes, the chickens are crowded into small cages, piled on top of each other. As a result, body wastes fall on top of the chickens below.

Most people believe that eggs from chickens are not causing any harm to animals, because, after all, chickens naturally lay eggs. However,

For a more graphic look at the egg industry, see this page about 12 Egg Facts the Industry Doesn’t Want You to Know. The pictures are disturbing and the statistics are troubling.

If you want to learn more about “humane eggs” and the life of a chicken in California (currently, most consumers think California’s Proposition 2, which went into effect January 2015 has made life better for laying hens), read this chilling story about Emma, a rescued chicken, from Direct Action Everywhere.

Consumers are willing to pay more for cage-free eggs, assuming this means laying hens were treated more humanely. However, as Direct Action Everywhere has found, cage-free eggs are even more horrendous than battery cages. They noted that:

While it is good that consumers are concerned about the welfare of chickens used to produce their eggs, paying more money for more suffering does not help any chickens.

Did you know eating chickens is not good for you?

Many people have lowered their consumption of red meat and switched to chickens in the belief that this will help them lower cholesterol. However, a recent meta-study has shown that switching to chicken (or even fish) does not lower cholesterol. The beef industry did a meta study of 60 years of research and found that some cuts of beef have lower cholesterol than chicken (not surprising since chickens have been genetically modified to increase their fat content to make them more profitable).

… understand that chickens in the 1950s used to run around eating natural grains and went to slaughter after upwards of six months. Now they go to slaughter as soon as six weeks and are far heavier due to artificial selection and an unnatural diet designed to produce fat birds in record time.

Modern chickens are cooped up in dirty cages, , lacking room even to turn around. In order to keep them alive under those conditions, their food is dosed on a regular basis with antibiotics. So you are eating a fatter chicken, pumped full of antibiotics that can mess with your natural bowl flora that can affect your weight; it is filled with toxins that can cause inflammation in your body. On top of this mess rides the illusion that chicken is a healthy choice, so it is over-consumed.

Chicken is not a low fat food because of the drugs given to chickens to make them grow so fast. In fact, chicken has been found to promote obesity and cancer. Poultry workers have high rates of pancreatic and liver cancer, because of exposure to cancer viruses while working. This is thought of as a warning signal for people who have less exposure to poultry viruses by eating poultry.

Did you know eating eggs is not good for you?

Most of us think that eggs are good sources of protein, but did you know that the USDA does not allow advertising to say that eggs are healthy? The most that can be said is that eggs are edible, hence we have the famous advertising slogan The Incredible, Edible Egg. Egg producers cannot claim health benefits.

Dr. Michael Greger examined emails from the US Department of Agriculture (USDA) to egg producers. He reported this:

A USDA official wrote, “The words nutritious and healthy carry certain connotations, and because eggs have the amount of cholesterol they do, plus the fact that they’re not low in fat, [the words healthy and nutritious] are problematic.”

Not only is the industry barred from saying eggs are healthy, they can’t even refer to eggs as safe because more than a hundred thousand Americans are food poisoned by Salmonella from eggs every year.

Dr. John McDougall has been writing about the adverse impact of eggs on human health since the 1970’s. He discusses how the egg industry pays for most of the research into the health impact of eggs in this 2016 article. This research bias, paid for by the egg industry, is used to advertise eggs to both physicians and consumers – resulting in poor health outcomes.

Did you know chicken waste is a leading cause of polluted waters?

The Delmarva Peninsula is the location of over 1,700 chicken farms (it contains parts of Delaware, Maryland, and Virginia and borders the Chesapeake Bay and Atlantic Ocean. The 1.5 million pounds of manure from chickens pouring into the Chesapeake Bay is more than the annual human waste of New York, Washington, DC, San Francisco, and Atlanta combined.

This manure gets into the Chesapeake Bay, creating “dead zones” with low oxygen and algae. Runoff from chicken farms have killed millions of fish and causing human health problems such as skin irritation and memory loss.

Chicken waste images are heart-breaking and show the environmental devastation caused by our insistence on using these birds for our food.

You make a choice every time you sit down at the table. That egg you are eating came from 22 hours of torture for some poor chicken. Those chicken nuggets came from a baby chicken, tortured all his or her life, and then mercilessly slaughtered. A simple way of showing your compassion for these sentient animals is to simply refrain from eating them.

Davis, Garth, MD.,  Proteinaholic: How our obsession with meat is killing us and what we can do about it, HarperOne, 2015.