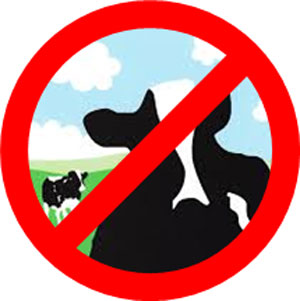 Did you know there are no happy cows?

If you believed all the marketing messages, cows live in lovely green pastures with their friends and children near them. They are happy and content and can even talk to each other (Remember the ads from Ben & Jerry, California Happy Cows, Laughing Cow cheese?).

Many people do not realize that, like all mammals, cows only produce milk right after they have given birth. Their milk is meant for their calves and it is filled with saturated fat, animal protein, cholesterol, and lactose so calves can begin to grow from their 80-pound birth weight to their adult weight of over 1000 pounds. Humans drinking cows’ milk grow, too – but given the obesity crisis in our country, we do not need to rapidly gain weight.

Humans are similar to cows: mothers lactate to feed their children. As children grow, they are weaned from breast milk and start eating solid food. However, for cows, their calves are taken from them soon after birth so their milk can be used to feed human children and adults.

We are the only species that drinks the milk from another species. We have no physiological need for non-human or even human milk once we are weaned. However, we often buy cows’ milk in containers with pictures of happy cows on the labels, believing the marketing messages of the dairy industry.

As mothers, cows are often compared to humans. Both species have a nine-month gestation period and after birth, they are diligent in performing nuzzling, grooming, and feeding. In semi-wild herds, cows prefer to graze with their sons and daughters even after having several children. Once weaned, cows do not return to their mothers for milk – but somehow, humans think we need to drink the milk of another species after we are weaned. 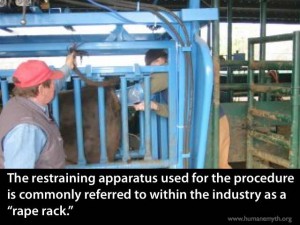 Did you know about the sad lives of dairy cows?

Cows must have a baby in order to produce milk. Semen is collected from bulls, frozen, and transported to cows. The in estrus cow is typically restrained in a device commonly called a rape rack. A human then inserts a gloved hand into the cow’s rectum and guides an insemination tube into the cow’s cervix.

This non-consensual process sounds depressingly familiar. Female bodies are often used for profit and pleasure (remember, humans do not physiologically need to drink cows’ milk). Feminist writers have also made the connection: Betsey Beaven, 1981; Carol J. Adams, 1990 and 2010; Marla Rose, 2013, and the web articles, such as To be a Feminist is to be a Vegan.

At birth, dairy calves are removed from their mother so the cow’s milk can be used for human profit rather than to feed their babies. Almost 97% are removed within the first 12 hours after birth. Some animal agriculture humane farms remove the calves within an hour of birth, thinking this prevents the bond between mother and child from forming.

This separation is devastating for both mother cow and baby calf. Cows bellow and exhibit distress for days and even weeks after their calves are taken from them. Calves bellow so much that their throats become inflamed. For examples, see these YouTube videos. In Europe, there are confirmed stories of mother cows traveling up to 30 miles to find their calves [Robbins, The Food Revolution, p.206].

At birth, some male calves are simply thrown into dumpsters because they have no economic value; they can’t produce milk and they are the wrong breed for beef production. Other male calves and about half of female calves are confined to veal crates without enough room to move around. Calves kept confined and anemic, when slaughtered at 3 – 16 weeks of age, result in the preferred pale and tender veal on human plates.

Many people avoid eating veal because they understand the cruelty in the way veal is produced. Consumers who avoid veal often fail to consider that veal is a by-product of the dairy industry.

Most female calves are destined to become dairy cows like their mothers. From an animal agriculture site, here is a description of how calves are treated in the first months of their lives, before they are inseminated at about 14 months of age:

The newborn calves get to have a little time with their mother, long enough for the cow to clean the calf and lick it dry. The calves never have any nose-to-udder contact with the cow. (This is another step in food safety for milk – it limits the bacterial contamination of the udder.) Once the calf is clean and dry, the cow is moved, her colostrum is hand-milked and bottle fed to the calf within 2-4 hours of being born.

After spending a half-day in this straw pen … calves are moved outside to their own, individual calf hutch. The hutches are sort of like big dog houses. There is a fenced-in area in front of the hutch, so the calves can come in and out whenever they want. They are close enough that they can see and smell other calves, but not touch them.

The image above shows dairy hutches for 1600 calves. This is quite a different picture than all the marketing images of happy cows socializing and grazing in open fields!

As a business, dairy operations are concerned with maximizing profits and minimizing costs. Practically, this means everything possible is done to maximize the quantity of milk produced by each cow while minimizing the costs and labor needed to produce the milk. These practices include the following:

Unless otherwise noted, these practices are documented in a Humane Society report.

Cows are subjected to long and stressful trips to slaughter houses, put into trucks where there is no room to move, food, water, or protection from weather.

Once cattle get to slaughter houses, the horrors continue. Here is one description from John Robbins [Robbins, The Food Revolution, p. 211-212]:

The Federal Humane Slaughter Act is full of exceptions and does not cover 90% of animals killed for human consumption. Most believe this requires animals to be dead before being cut into pieces, but the Humane Society reports that it means animals “should be insensitive to pain” before being chained and cut up. One slaughterhouse employee said, “I estimate that 30% of cows are not properly knocked … I can tell these cows are alive because they are holding their heads up and make nose.” Another said, “Cows can get ten minutes down the line and still be alive. All the hide is stripped down to the neck. Workers can open the legs, the stomach, and the neck, cut off the feet while the cow is still breathing … I would estimate one out of ten cows is still alive when it is bled and skinned.”

The disturbing image above shows a US slaughter house in Kansas City owned by Cargill. It shows the reality of hoisting a large animal by one leg with a chain (dislocating hips before death). Humans don’t like blood in their animal flesh meals, so they are stabbed in the throat while upside down so the last beats of their hearts will force their blood from their bodies. 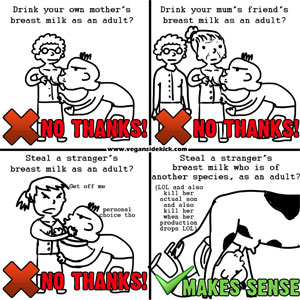 Did you know eating dairy is not good for you?

We have been brainwashed into believing that dairy is a health food; this thinking certainly increases the profits of the $46 billion US dairy industry. We think we need the calcium from dairy to support strong bones because we have been told that since our early school days as part of dairy’s marketing messages. Actually, calcium is a mineral and you can get it from the same place cows get it – from eating green, leafy vegetables. This simply leaves cows’ bodies out of the process.

Dr. John McDougall has called milk liquid meat and advises people to give up dairy before giving up red meat for the most health benefits. He says that the only reason cows’ milk products are palatable to humans is because of all the added sugar and salt in items such as cheese, yogurt, and ice cream! 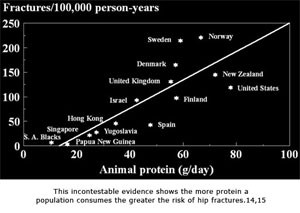 Here are some of the known health issues of consuming milk, summarized from Dr. McDougall:

Dr. McDougall summarizes the adverse effects of eating dairy as:

Dairy foods are high in calories, fat and cholesterol; contributing to the cause of heart disease, strokes, type-2 diabetes, and obesity.  They are high on the food chain so they accumulate, in sometimes dangerous amounts, environmental chemicals. Dairy protein is the number one cause of food allergies and can cause more serious forms of “food allergy” called autoimmune diseases.  Dairy products are also known to be infected with life-threatening microbes, including E. Coli, listeria, salmonella, staphylococci, tuberculosis, bovine leukemia viruses, and bovine AIDS viruses. A more complete discussion of the hazards of cow’s milk is found in my May 2003 newsletter article, “Marketing Milk and Disease.”

More and more journalists are questioning the health benefits of human consumption of milk. Check out this 2014 New York Times Upshot article, which states that not only is dairy unhelpful, it is also harmful to human health. Direct Action Everywhere includes this detailed expose on the white lies told by the dairy industry.

Did you know cows are a major source of pollution for our air, rivers and lakes?

If you are concerned about the environment and want to preserve resources for future generations, the best step you can take is to eliminate meat and dairy from your diet. 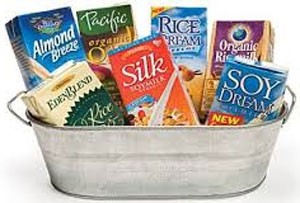 Giving up cows’ milk is one of the easiest dietary changes you can make to help alleviate the suffering of these noble, peaceful, innocent animals. Humans do not need milk to lead healthy lives, but if you like something white on your morning cereal, there are a variety of nut and grain milks available in any supermarket. Almond, rice, soy, oat, and cashew milks are kind alternatives. You can also find all your favorite treats in non-dairy versions, such as non-dairy ice cream, yogurt, and cheese.

It is easy to cook and bake with nut or gain milks, so you can still make your favorite cakes and pastries. Processed baked goods, even bread, often contain milk so carefully check the labels for non-dairy or vegan options.