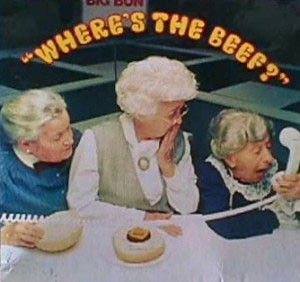 Do you know where’s the beef?

The iconic 1984 Wendy’s ad campaign is associated with ever-larger burgers on our plates. Rarely do we think about the cattle that have been raised and slaughtered to satisfy our cravings for burgers, steak, and roasts.

Up close, cattle are calm and peaceful. Despite being such big animals, domestic cattle have been bred to be passive and controllable. Here are some characteristics of cattle:

Similar to dairy cows, cattle have a natural lifespan of about 20 years. However, because of modern animal agriculture practices, adult cattle are at full weight and slaughtered at 14 – 16 months of age. Calves used for human consumption are slaughtered at 3 – 16 weeks of age. When you eat beef, you are eating cattle who are still babies or in the very early stages of their natural lifespan. 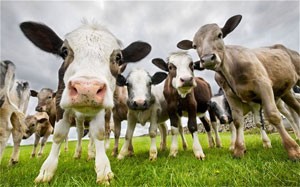 Did you know about the short lives of cattle?

Unlike dairy cows, who are removed from their mothers at birth, beef cattle get to stay with their mothers for the first six months of their lives. In western cow-calf operations, mothers and calves spend most of their time in pastures eating their natural food: grass. 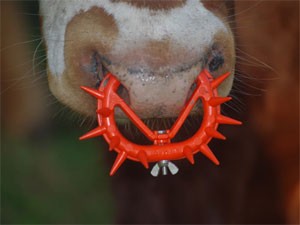 Some small farms and some beef cattle farms use weaning devices to keep calves from drinking their mothers’ milk. Producers of these devices claim they make the results of separating calves from cows more profitable.

There are web sites that sell these devices, with videos to show them in use. Inserted into a calf’s nose, these devices keep the calf from drinking from his/her mother’s udder. Any way you look at it, separating mothers from their offspring involves emotional distress for the cows.

All cattle farmers are familiar with the stress associated with weaning calves from their dams. Broken fences and bawling cattle are well known symptoms of a process that also leads to a loss of condition and weight in both calves and cows.

Calves then have one really bad day at about two months of age, when they are branded (with an instrument heated to 950 degrees) and castrated (without anesthesia). When the calves weigh about 600 pounds at about six months of age, they are weaned, taken from their mothers, and put in a pen with some other calves. In the pen, calves start to eat corn. During this “backgrounding” process, many calves become sick from the new food and the separation from their mothers. However, this is better than what will happen to them for the remainder of their short lives. 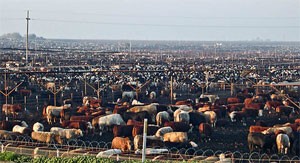 After the pen, cattle are transported to feed lots in long truck rides without food or water. Feed lots are miserable places, containing thousands of cattle enclosed in metal fences with no shade or shelter. They have to stand or sleep in their own manure until they eat enough to reach their slaughter weight of 1,000+ pounds.

It used to take about five years to grow a cow to slaughter weight; today, it takes only 14 – 16 months. Feed includes corn, protein and fat supplements, and drugs, although, as ruminants,  their natural food is grass and pasture. Antibiotics are used to keep illnesses at bay – especially digestive illness caused by diet.

No one knows the impact on the humans who eat all these drugs – the meat industry claims beef is safe. However, many European and Asian countries are banning the import of US beef because of safety concerns over the drugs used to promote growth. 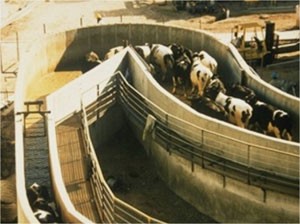 When it is time to die, cattle are walked single file into a chute where they can hear the cries of terror from the cattle ahead of them. The Humane Slaughter Act says they need to be knocked out before slaughter, so a pneumatic gun shoots a bolt between their eyes into their skulls. However, because of the speed of the line, many of these animals are only stunned and they are conscious as they are bled, skinned and dismembered.

Speed means profitability, so slaughter lines are getting faster and crueler. Here are some steps in the process:

We rarely see or hear slaughter houses – they tend to be located in isolated areas and typically hire undocumented workers to do this bloody work that most Americans do not want to do. These workers suffer from horrible physical injuries because of line speeds and adverse psychological illnesses. Ag gag laws in many states keep out documentary journalists. 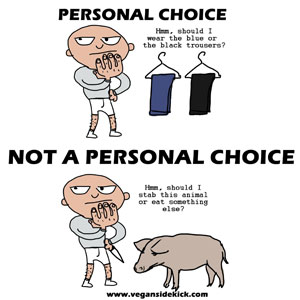 Did you know eating beef is not good for you?

A plethora of studies have shown that eating beef is not good for humans. Here are sample study results:

Did you know cows are a major source of pollution and cause of global warming?

The recent movie, Cowspiracy, tells the little-known story of how cattle agriculture is the major cause of global warming. Meticulously researched and summarizing major worldwide scientific studies (you can read more here) some of the findings are detailed below:

If you are concerned about the environment and want to preserve resources for future generations, the best step you can take is to eliminate meat and dairy from your diet.

Beef is not good for you, for the planet, or for the environment. You can change the world for the better, for yourself, the animals, and your children, by simple eliminating beef and other animal products from your diet. There are so many alternatives. In fact, every dish you enjoy as a meat-eater comes in a vegan version that is kind to animals, the environment, and you!

These are the realities of your food choices. With every burger, steak, pot roast, turkey sandwich, fired chicken, rib, barbecue, port chop, bacon, ham, or whatever you want to call it or however you want to cook it, you are perpetuating the demand, which furthers the business of raising animals and then slaughtering them for you to eat. You can turn your head the other way, but the process continues. It continues at the detriment and ill fortune for the animals, for our health, and for the health of our planet. Until this moment, most of you have been comfortably unaware with regard to food responsibility and global depletion. What you decide to eat is killing our planet, but it does not have to be that way – if the right choices are made.