Many of the ducks who live on the Safe Haven pond flew there from a nearby gun club after being released from dark boxes to be shot at by humans with guns. Of course, after being held in dark boxes while being transported to the shooting range, the ducks are dazed and confused when they are released. They fly up into the air and many are killed for sport; a few of them make it to the safety of Safe Haven.

Other ducks come to Safe Haven from people who purchase young ducks around Easter for their children.  As the ducks grow, the purchasers find they can no longer care for the ducks and their children lose interest. These ducks are unable to fly and have no idea how to live in the wild since they were raised for a few weeks on a factory farm without their mothers to teach them how to live on their own.

Ducks are raised in crowded cages on factory farms for meat and killed in unbelievably cruel ways. Many are force fed through metal tubes jammed down their throats until their livers become huge with fat. The ducks are killed and their livers ground up to make fois gras, a so-called delicacy that humans choose to eat without concern for the animals from which it is made. Other wild type ducks, like mallards, are often raised on factory farms, unable to learn how to live in the wild, and then shipped to gun clubs where they are released to be shot by hunters hiding nearby in duck blinds.

Muscovies are often referred to as the “quiet” or “quackless” duck. The males vocalize with a “hissing” sound while the females make a sound called a “pip” which is similar to the sound of a flute. Muscovies have a “crest” on the top of their heads that they use to express themselves. The males often raise their crest during mating season to fend off other males and show dominance. The crest is also raised to impress and attract the female. Muscovies use body language to communicate. They will wag their tails and raise and lowering their heads at one another. 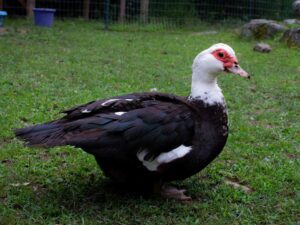 Lola came from a hoarding situation in Lagrange, NY. The homeowner had just a few days to remove his 40 birds otherwise was he was facing a fine. Neighbors reported the situation due to the unsanitary conditions and horrendous odor. Tragically, Lola’s daughter passed away due to metal she ingested which punctured an air sac. Lola moved in with Elle and lots of other duck friends and she enjoys spending her days exploring and swimming in the pond. 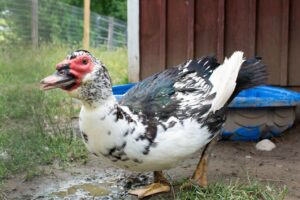 This gorgeous duck was found by Animal Control in NYC.  His history is a mystery!  He was taken to the Wild Bird Fund where she was examined and found to be in good health.  They contacted us and we happily welcomed him to our farm family.  He quickly became the boss of our duck family and keeps everyone in check! 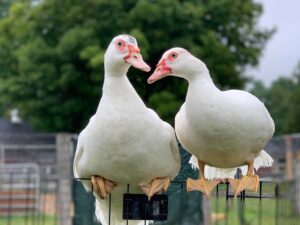 This dynamic duck duo was rescued by some incredibly compassionate humans after being dumped in Central Park.  Tragically, there were three of them but one did not survive the unfamiliar environment where they were abandoned. When pets and farmed animals are callously tossed out of their homes, survival is near impossible. They are left at the mercy of predators or slow and painful starvation. We are full of gratitude for those who rescued these sweet Muscovy girls and thrilled to welcome them into our family.

The Pekin is a large domestic duck used primarily for egg and meat production. They have pure white feathers with orange legs and bills and range in weight from 8-12 pounds.  Ducks are able to stay afloat in the water because of air sacs inside their bodies that increase their buoyancy! Their feathers are covered with a waterproof substance that keeps the ducks warm and dry.  Pekin Ducks are poor fliers due to their large, heavy bodies. Ducks do not have teeth, but they do have bumpy edges on their bills that help them to filter food out of the water. 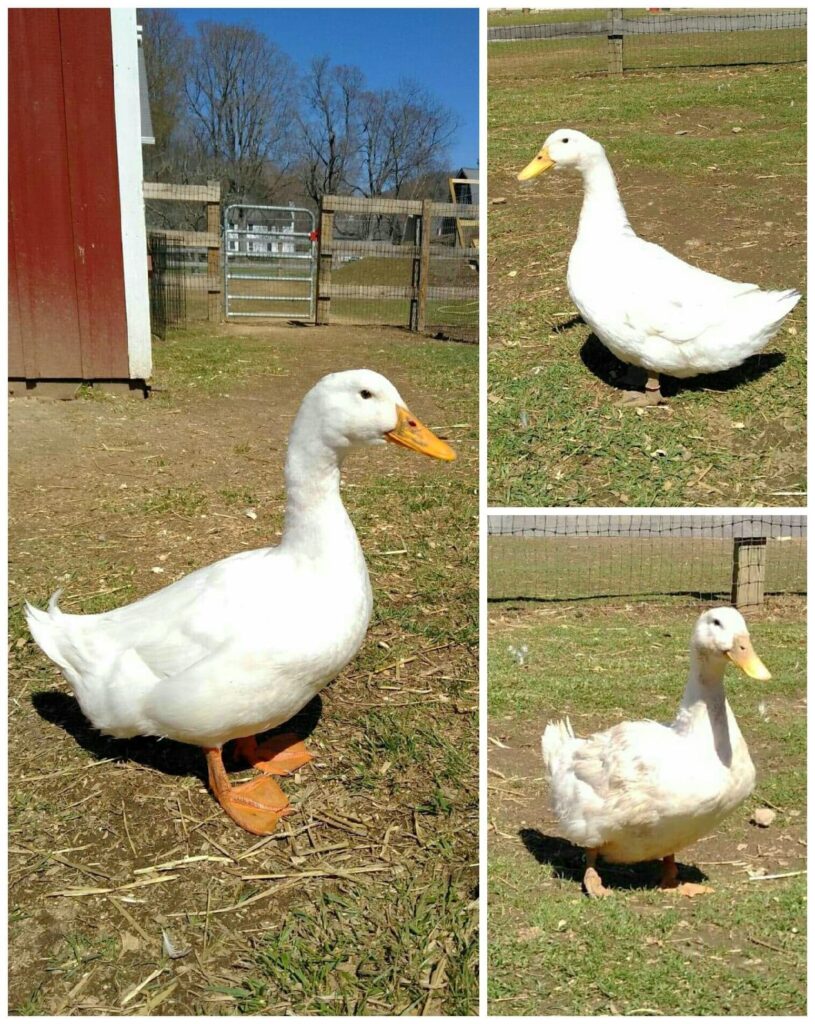 Formerly known as the “Fantastic Four”, this group included a sweet duck named Noah who sadly passed away.  His friends Nicholas (left), Savannah (top/right) and Scarlett (bottom/right) sorely miss him.  These ducks arrived at Safe Haven in the summer of 2019.  They came from an egg hatching project at a school in Armonk, NY.  As often happens with hatched baby ducks and chicks, placement of the babies fell through and the school really had no idea what to do.  One of the teachers found us online and contacted us.  They really had no other possibilities so we took the babies at nearly 2 weeks of age.  These duck friends are living happily at our sanctuary and enjoy spending  their days exploring and swimming in their pond.

We welcomed this sweet Pekin duck in the Fall of 2019.  She was aquired at an upstate farm by a Yonkers resident who kept her in their apt for nearly a year.  They decided they could no longer keep her and were going to release her in a pond in a town park.  When relatives found out, they decided to take the duck home and care for her.  They knew she would have met certain death from a dog or other predators since Perkins can’t fly!  So, they let her swim in the bathtub and she ate chicken feed, kale, and cheerios.  They soon realized she needed a more appropriate home and contacted Safe Haven.  Shaye is quite friendly and vocal and loves to “chat” with her human friends.  We are so glad to report that she is living happily with the rest of our duck family.

Petunia is an adorable Crested Duck. This type of duck is known for having a powder puff of white feathers on the top of the head! Petunia lived with 4 other duck friends in a loving home on Long Island. Sadly, her pals were killed by a dog but Petunia managed to escape the same fate. The family was devastated and sought a safe and loving home for her.

When Petunia was ready to join our flock at Safe Haven, the other ducks raced over to say hi, circled around her, and urged her to join them for a swim. 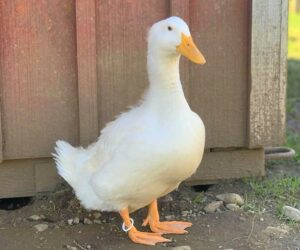 Cassidy lived in upstate NY.  The man who owned her did a lot of traveling and realized he needed to find a more suitable home for her.  We are happy to report she will never be lonely here at Safe Haven as she has made friends with the abundance of ducks living happily our sanctuary.  She enjoys her days swimming and foraging with her new family.

Campbells are very energetic little ducks that need plenty of space to explore.  They typically weigh about 4 pounds and come in a variety of colors: Khaki, White, Dark and Pied.  Even though this breed does not necessarily require water for swimming, they do enjoy swimming in shallow waters.  They are excellent foragers that keep gardens and ponds free of slugs, snails and worms. 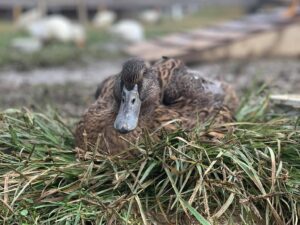 This little beauty is a Dark Campbell duck known for their “chocolate” colored feathers!  Bridgette was found on a farmer’s property.  She was unable to move.  Further inspection revealed that she had no muscle in her legs to stand and was suffering from a ripped web on her right foot.  Bridgette had some serious challenges when she first arrived at Safe Haven in the Summer of 2020.  She was dehydrated and hungry but was unable to eat or stand on her own for even a second.  Bridgette was brought to us in the hopes we could rehabilitate her.

Our dedicated staff made sure to give her pond physical therapy twice a day.  Within 12 days, Bridgette was able to stand on her own and within 15 days, she was able to walk on her own!   Bridgette is a fighter and with the help of her Safe Haven friends, she is now able to live a happy duck life.