You can honor a turkey by becoming a sponsor! Just click one of the options below and know that you are truly changing lives.

You will receive a certificate that includes a photo of your sponsored animal and their inspiring story! The certificate is customizable for gift-giving purposes! Sponsorship certificates show your respect and compassion for farmed animals everywhere.

Turkeys are intelligent animals who can recognize hundreds of other turkeys. When you pet a turkey, you will be surprised at how soft they are and many even enjoy a good hug.  They are individuals and each has their own distinct personality.  They like to stick together and explore the fields at Safe Haven. Tragically, each Thanksgiving, 46 million turkeys are slaughtered for holiday feasts.  Most have lived a miserable life of inhumane conditions in crowded, filthy sheds with no windows for 3-4 months before being slaughtered.

Abby arrived in the summer of 2016 at approximately a week old.  Abby was one of 4 baby turkeys that arrived by car.  These babies sadly had many health issues.  Despite several trips to the vet for medication and treatment, two of the babies passed away after just a few months. Abby and her friend Calvin survived.  Calvin only lived to be a year old leaving Abby as the sole survivor. The lesson from this is the early killing and mass reproduction and crowding that these turkeys undergo lead to illnesses and congenital problems.

These issues become widespread in the flock given they only have to live to about 4 months of age before being slaughtered.  The babies who are sick with congenital diseases or infections acquired early in their lives are simply thrown out and there is no effort made to diagnose illnesses that could be treated.  They are simply eliminated and discarded from the flock. Abby is an ambassador for all the turkey babies who are born into terrible conditions and are not rescued from the terrifying and horrible few months of life they have to live on factory farms.  We are so happy to have her as part of our farm family.  She has a gentle and curious nature.  She is also a quite observant and curious girl who loves exploring. She has blossomed into quite the beauty! 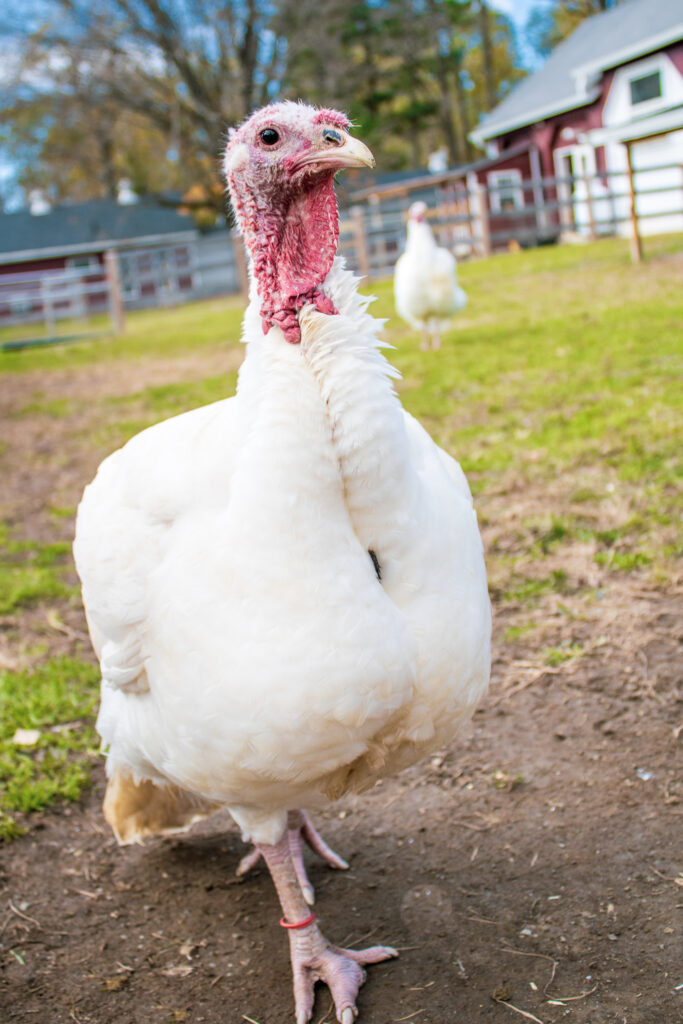 Bella is a beautiful commercial turkey who was found outside someone’s home not far from our sanctuary.  Fearful that coyotes or dogs would kill the turkey, the compassionate man took Bella to his mother’s farm and put her in an unused chicken coop.  The mother felt she couldn’t care for Bella and wanted to find a suitable forever home for her.  We eagerly welcomed this beauty to our family in the fall of 2020.  Despite being bigger than any of our other turkeys, Bella is a gentle soul who doesn’t fight with the other girls but, in fact, sits down in the middle of a group of turkeys and chickens and talks to each one in turn. She is self-assured and loves peanut butter!

Carmela arrived at Safe Haven just two days before Thanksgiving in 2018.  She was nameless and destined for slaughter. Due to the heroic actions of compassionate individuals who rescued her from a Brooklyn slaughterhouse, she was spared the fate of becoming Thanksgiving dinner. Here at Safe Haven, all of our rescues are viewed as living beings who deserve to be treated with respect and kindness. Carmela is now now ‘home” and will never be considered a “product” again. Carmela is a hoot! She is fun and daring. She is also quite clever and knows exactly which locations to search for potential treats. 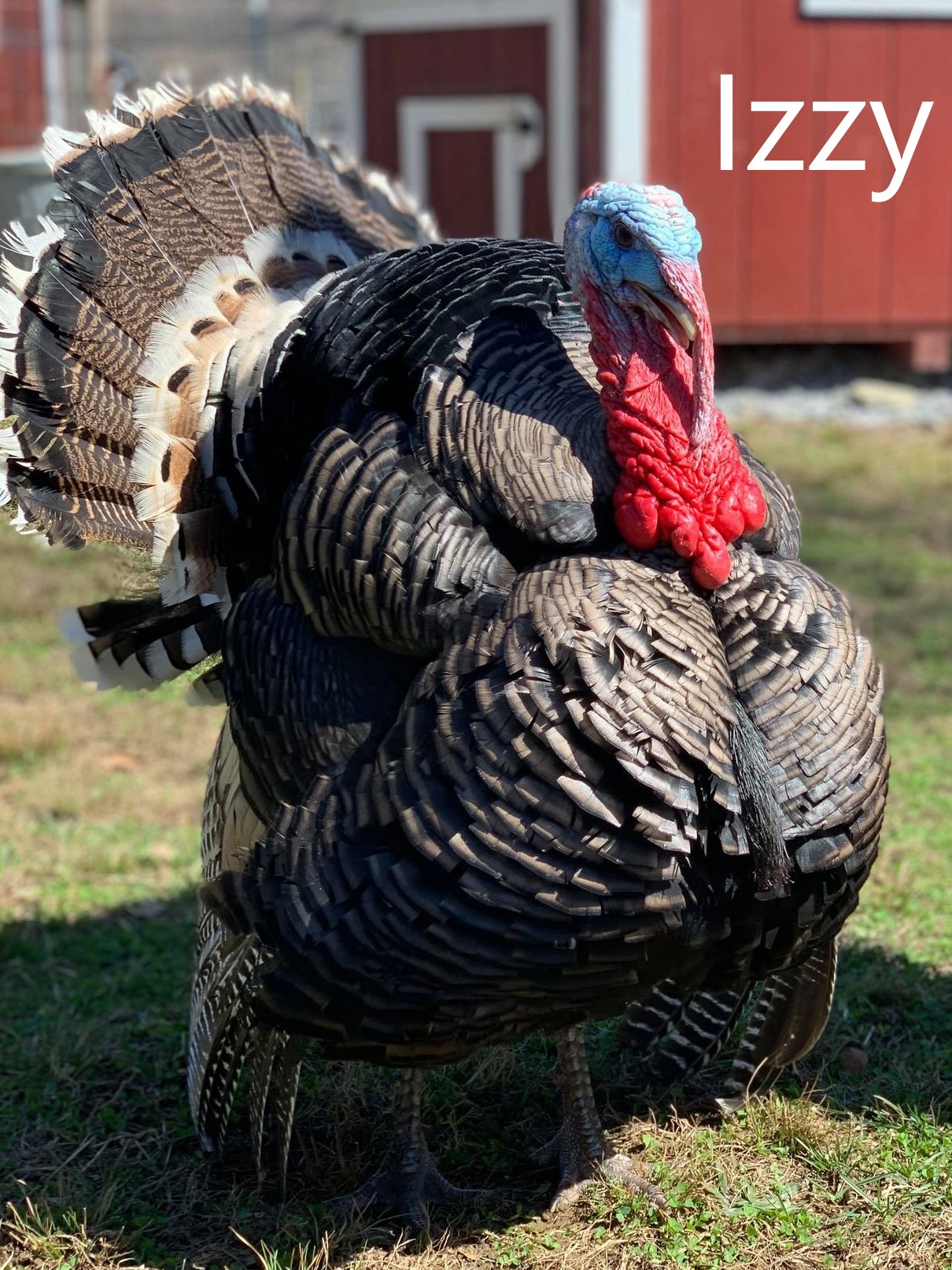 In April of 2020, Izzy was rescued as a baby from a farm raising him as a meat bird.  A year later, he had grown considerably.  The couple that rescued Izzy adored him but, because of Izzy’s increase in size, they became concerned for the safety of the rest of their feathered family of hens and ducks.  They decided to find a suitable home where he would be loved and respected and continue to live a happy life.

Izzy joined the Safe Haven family in April 2021 and is enjoying life at the sanctuary. He is a combination of the Heritage Narragansett and Midget white turkeys. Izzy is quite the proud and handsome fella and loves to strut his stuff. 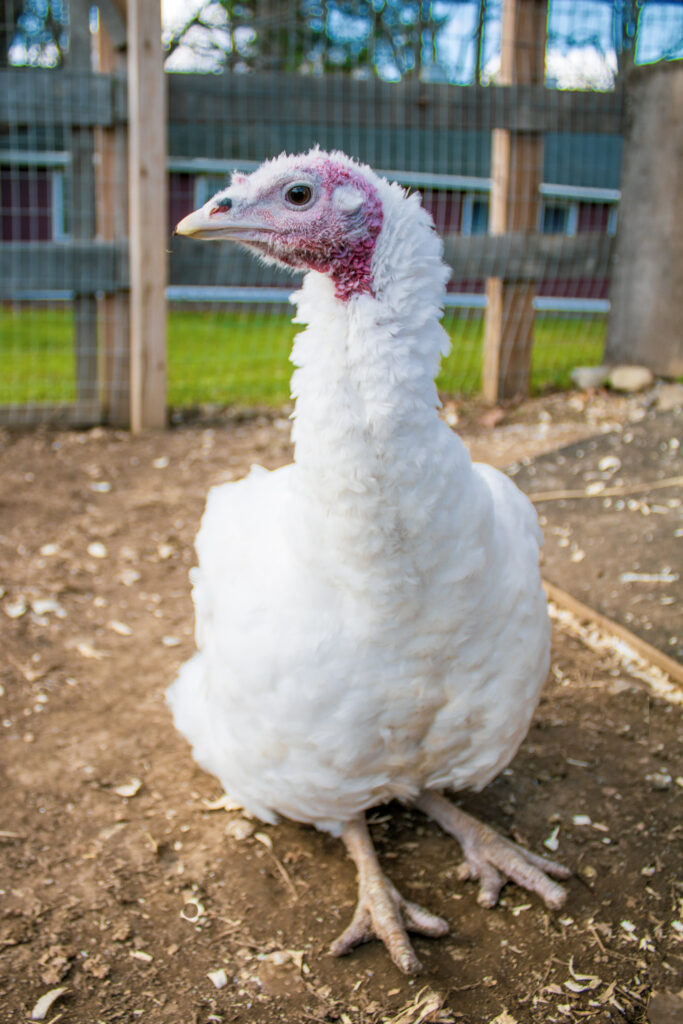 Jenny and Sophie were rescued from a live market in NYC in November of 2020. The workers at the market gave the two turkey babies to activists who were bearing witness at their market. The rescuers contacted our sanctuary and we were happy to welcome these precious babies to our family. The vet came the following morning to do a complete exam. 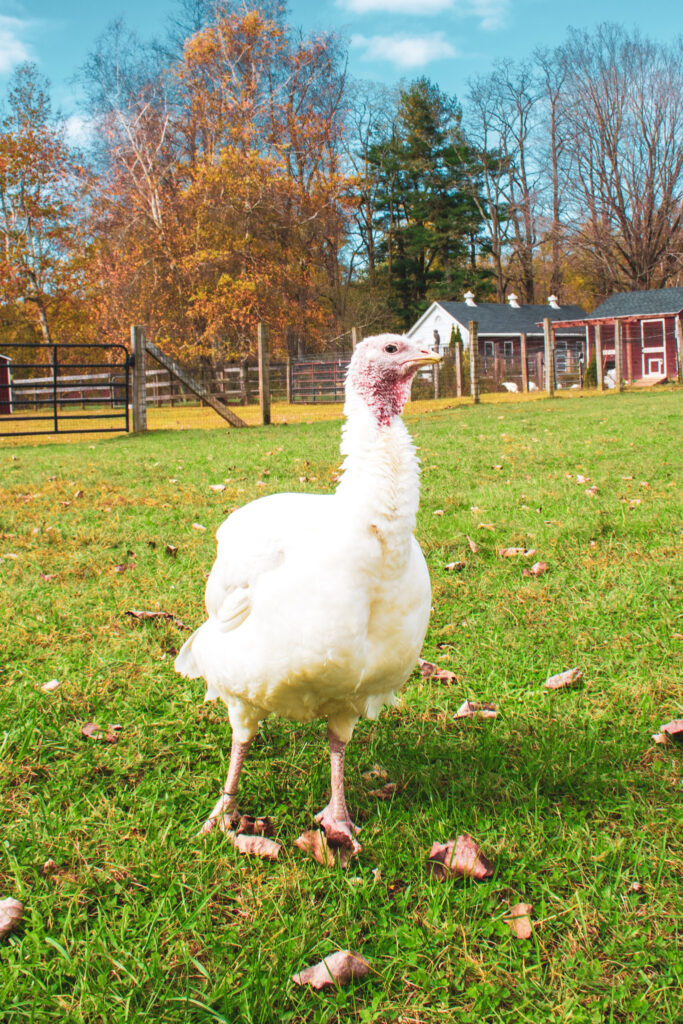 The turkeys were very young and small and facing some health challenges.  Jenny was very sick with parasites and a joint infection. Due to the joint infection, she has trouble standing. She is brave and determined and does not let her challenges stop her from enjoying her days. She lives happily with a couple of chicken residents who also have challenges with standing and walking. Sophie has become bonded with Carmela and is referred to by staff as “Carmela’s twin”.  She is adaptive and “like a sponge” and seems to pick up the best attributes from each of her turkey friends!  She also displays a comforting nature as a little sibling to her turkey family. 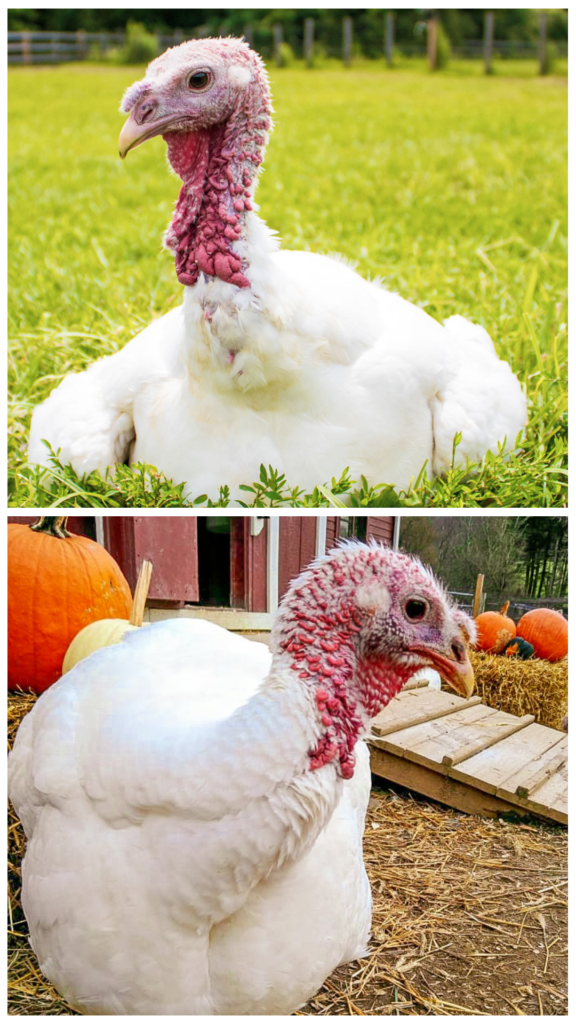 These two lovely turkeys were found wandering in the woods near a factory farm in the fall of 2019.  They were rescued by a compassionate individual who gave them food and water and kept them warm and safe until they could find them a forever home.

They are now living a free and happy life at Safe Haven and enjoy their days exploring with their fellow turkey friends.

Lizzie (top photo) is polite, confident, and protective of her fellow turkeys.  Rachel (bottom photo) is quite determined and she knows what she wants! She is also known for her leadership and adventurous ways! 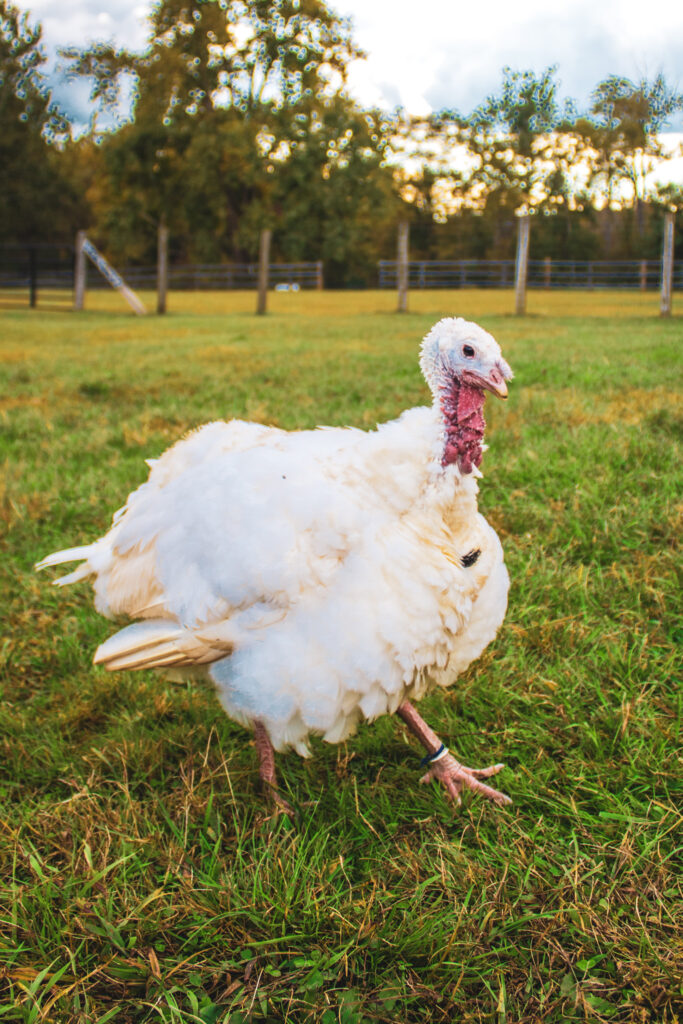 Trinity is a petite cutie who arrived in August 2014.  She was one of 20 turkeys left in a box at the entrance to Farm Sanctuary in Watkins Glen, NY.  They were most likely rescued from a turkey farm since their feathers were all white and they had had their beaks cut to prevent them from pecking and injuring the skin of the other turkeys in their crowded sheds.

Trinity is independent and sassy! She is protective of her fellow turkeys and keeps a close eye on her surroundings.