Pigs are smart and are often the subject of movies and books, such as Charlotte’s Web and Babe. As a result, children love pigs and most adults know that pigs are more intelligent than dogs. Less known is the emotional and social lives of these gentle creatures. They love to be with other piglets and show distress when separated from their friends. They have been known to recognize up to 30 other pigs and they greet each other affectionately.

Pigs can be quickly taught simple voice commands and even to fetch objects – and they remember the commands for over three years. Contrary to their reputation, pigs are extremely clean and they like cuddles from people. They roll in the mud to keep their sensitive skin from getting sunburned. Pigs naturally root in the ground and love to explore and play.

It is appalling to see pictures and videos of pigs at factory farms, where they are kept in cages so small that they can not even turn around. Mother pigs are forced to feed their piglets through iron bars. They grow up without stimulation and are then sent to slaughter. 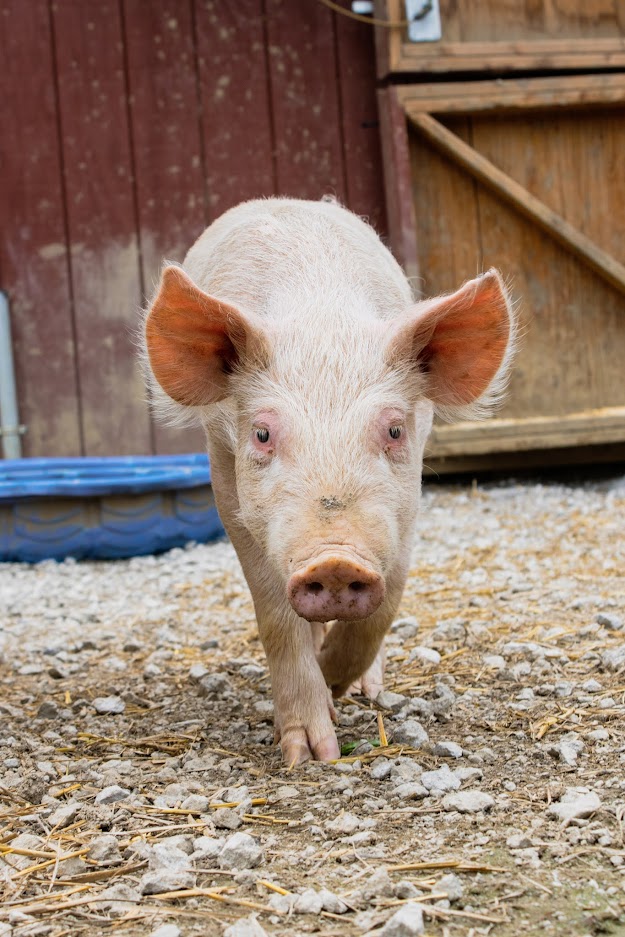 Caleb was rescued late one June evening in 2022 by a team of wildlife rehabilitators after they received a tip from a Facebook group. There was a farm pig severely injured and stuck behind a fence in Howard Beach, Queens. They took the piglet to the vet the following morning and discovered he had conjunctivitis and mite bites.  A bad skin infection left him bright red instead of light pink. His tail had been severed, 16 ticks were found on his body, and Caleb had two different parasites in his gastrointestinal tract. How this sweet pig ended up in a park in Queens is a mystery, but a local leader in animal advocacy noted that the piglet was “likely illegally purchased at a live market to be used in a sacrificial way”

Caleb arrived in July of 2022. He is incredibly full of life and friendly to everyone he meets. All he wants to do is play with his human friends! We are grateful for his rescuers; providing him with his lifelong home is an absolute privilege. Caleb is being treated for all of his conditions so that he can thrive and live a happy, healthy life. 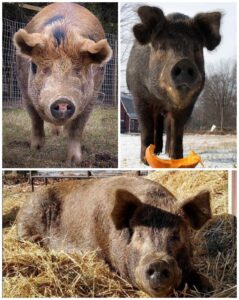 On a cold winter day in December of 2019, a production farmer from upstate NY made a beautiful choice.  He had a breeder pig named Jules who was scheduled for slaughter.  A girl who worked at the farm fell in love with Jules, and the farmer gave her time to find Jules a new home.

Having just moved, we had room for Jules in one of our barns.  We discovered this 400 lb. pig was sweet as could be and loves belly rubs. But we also realized something was terribly wrong.  It became clear that Jules was sad.  Despite our every effort to provide her with all she could possibly want or need, Jules did not want to eat.  Her days were spent pacing the perimeter of her pasture, stopping every few feet to lift her head in the air.  She was searching for something.  Searching for her sisters.  It turned out there were 2 other breeding sows destined for slaughter that Jules lived with her whole life, Irene and Virginia.

Since no other sanctuary could help, we did what most people do when they need help. We asked our friends for support! We turned to our incredible community via social media and email. Thanks to you we were able to raise the funds to make an adequate temporary shelter for the three girls and cover their initial medical exams. We called the farmer, and Jules’ sisters were on their way!

There was an energy at Safe Haven that morning unlike anything we ever experienced. Upon arrival, Virginia and Irene tentatively stepped off the truck and began sniffing the ground of their new home. Once Jules’ gaze landed on them, you could visibly see her spirits lift and her heart swell as she broke into a run across the pasture to greet them. The three sisters were reunited just in time for the holidays and are experiencing their “happily ever after” at Safe Haven. 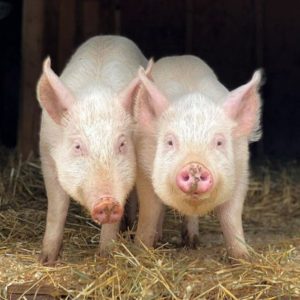 Charlotte and Gus arrived at Safe Haven in September 2019.  They endured unimaginable and brutal circumstances the first two and a half months of their lives.  Taken from their mother along with a group of 11 other piglets, they found themselves in the care of a man who owned a petting zoo. This man disposed of them after realizing these piglets had some medical issues.

Rather than seek treatment, he tossed the 13 innocent piglets on a pile of dead animals. He left them to die without food or water, completely exposed to the elements.  Fortunately, they were discovered by compassionate humans and were liberated from a truly heinous situation.  In poor shape, suffering from extreme dehydration, emaciation and severe sunburn, they were given proper nutrition, medical attention and showered with love.  We are very grateful we can provide a forever home to these astonishingly resilient little ones.

Gus and Charlotte are Yorkshire pigs – the most common breed raised for meat in factory farming.  They are expected to reach 600 lbs when fully grown! Their diet at Safe Haven consists of vegetables and very high quality low fat pellets to keep them healthy and happy. 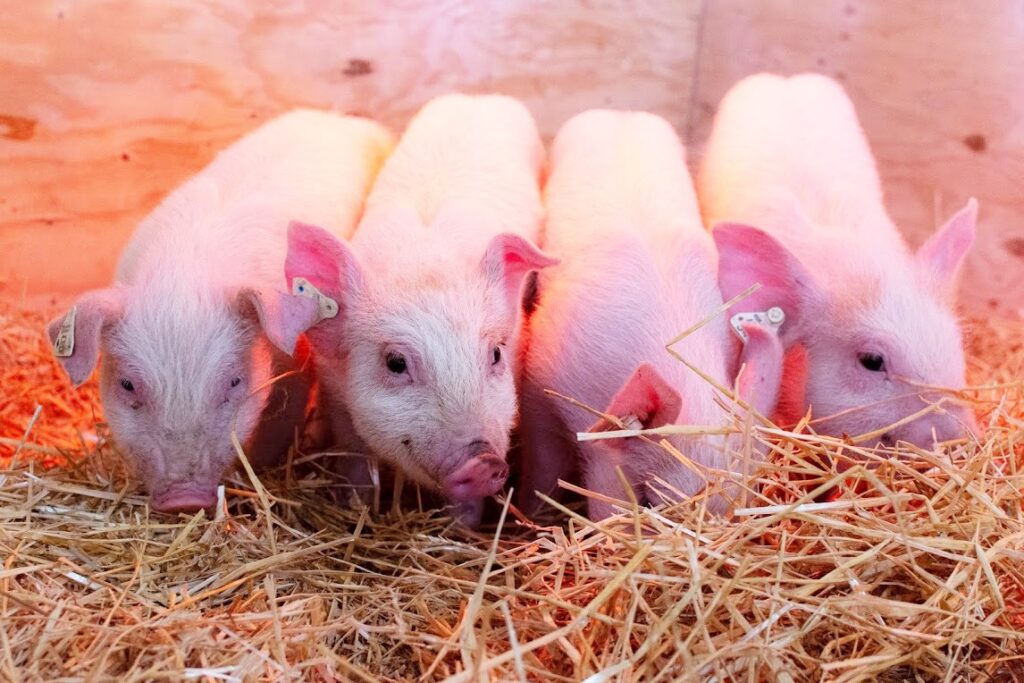 In January 2020, a truck carrying baby piglets was in a devastating accident. Safe Haven was contacted to help along with several phenomenal sanctuaries who banded together to get these babies to safety.

Thanks to the efforts of some spectacular women, these four delightful little ones were transported to Safe Haven. You would never know they were in a horrendous truck accident, trapped in the twisted metal overnight in freezing temps and narrowly escaped slaughter. Their resilience is inspiring. We are overjoyed to offer these precious piglets a home where they just get to be silly and lovable pigs without a care in the world. 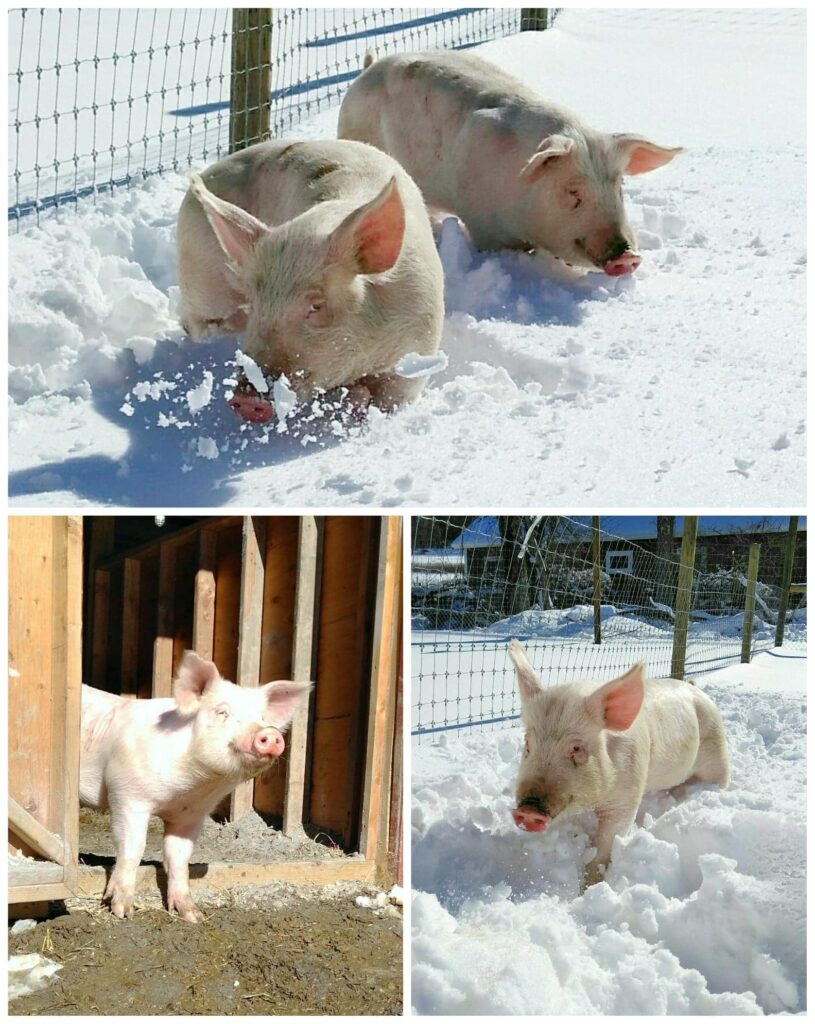 These two precious piglets were born on August 6, 2020.  They arrived at Safe Haven in January of 2021 after spending the first several months of their lives in a laboratory subject to experimentation. They  have found their lifelong home at our sanctuary where they will be treated with an abundance of love, care and respect. Our hearts nearly burst as we watched these babies experience the snow for the very first time.  It is a such a joy for us to see them just get to be silly playful piglets and witness their newfound zest for life.

Their names totally suit them – Sugar is as gentle and as sweet as can be while Spice is bold and adventurous!  They quickly responded to the love of our devoted caretakers and seem to know that they are safe from harm. 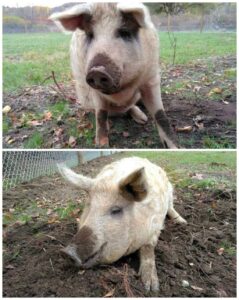 In late October of 2020, we received a call telling us that two pigs were beside the highway in Holmes, NY. The folks who found the pigs were worried for their safety. Safe Haven to the rescue! We were able to locate the pigs and arranged for a horse transport to assist us in getting them back to the sanctuary safely. Thelma and Louise were friendly but thirsty and hungry. At Safe Haven, they are getting all the nutrition and care they need to thrive and live happily with their extended pig family. These precious friends share a bond and love to explore together during the day and cuddle at night.

Louise is very curious and is not shy about requesting belly rubs! Thelma is independent and has a calm demeanor. In the summer months, these two can often be seen in the pasture enjoying an afternoon nap together in the shade.

They are a Hungarian breed called the Mangalica or Mangalitsa. This breed is often referred to as “the pig-sheep” or “woolly pig”. In winter, their hair is long like fleece and is thick and curly. In the spring, the hair acquires a blond, shiny and stiff appearance 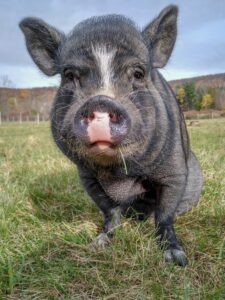 A loving woman adopted Gracie at eight weeks old and they were best friends for 2 years. Sadly, due to a health crisis in the family, the woman was in dire need of finding her precious Gracie a new home. She searched diligently for a suitable environment for Gracie but no one wanted the responsibility of caring for a pig.  She notified Safe Haven of her urgent situation and we opened our arms and our hearts to Gracie.  She arrived at our sanctuary in July of 2018.  We were happy to bring some peace of mind to her adoptive mother and welcome Gracie to our farm family.  Gracie Mae is an incredibly gentle and lovable pig.  She loves exploring the pasture and taking afternoon naps in the sun.  She happily wags her tail when she sees her human  friends and is not shy about requesting a good belly rub – staff and visitors are always happy to oblige.

Harry is a pot-bellied pig who mysteriously arrived at the sanctuary in the summer of 2017. He was abandoned overnight at Safe Haven by his humans. He was discovered in the early morning hours by one of our caretakers when she heard him rummaging around and knocking over various farm tools!

Harry was initially quite reserved but, over time, has responded to the love and attention from our staff and has come out of his shell. He is a sensitive boy who is quite vocal in displaying his emotions. He will not hesitate to tell you exactly how he feels! Harry has made himself at home and is enjoying life on the farm. He especially loves grazing in his huge pasture, taking mud baths, and hanging out with his fellow pot-bellied friends. 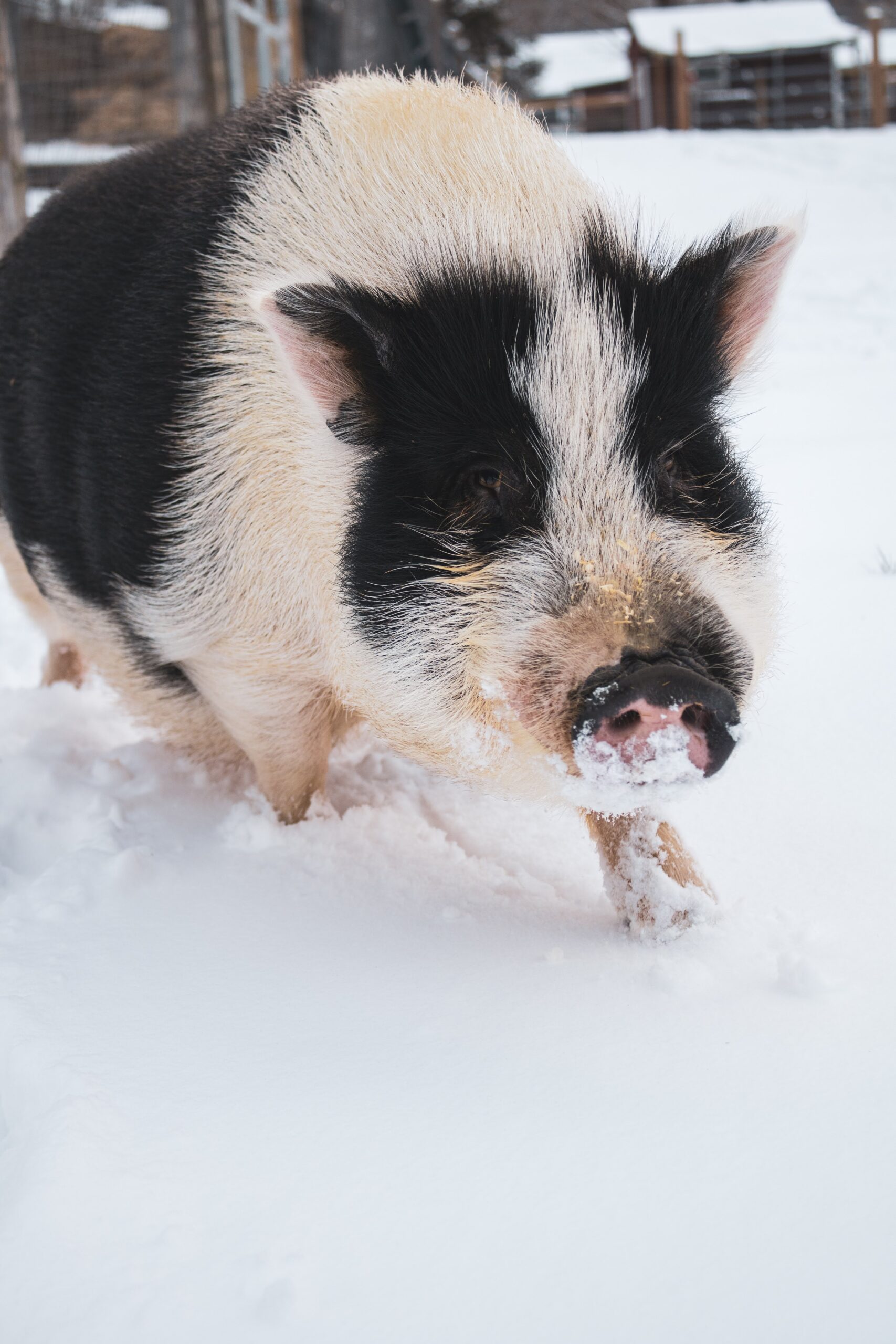 Leo is a spunky mini pot-bellied pig who was purchased as a family pet and lived in an apartment in Queens. He suffered from separation anxiety when his people left to go to work. His squealing disturbed the neighbors, and due to their complaints, his family had to find him a new home. Leo arrived at his forever home in May 2015.  At Safe Haven, he enjoys the life of a pig, rooting in the dirt, taking mud baths and exploring the pasture with his pig friends.

Leo is incredibly smart, friendly and full of personality. His enthusiasm for life is contagious. He is a very busy boy but never too busy to flop for a belly rub from his human friends!

Otis arrived at our sanctuary in September of 2015.  He started his life in the Bronx as a pet. His owner fell on hard times and left Otis with a friend, but she never returned.  He lived in a cramped crate under a deck for several months.

He is a bit shy around newcomers but eventually warms up once he gets to know you.  At Safe Haven, Otis enjoys exploring the pasture with his pig friends, taking mud baths and getting belly rubs from our staff.