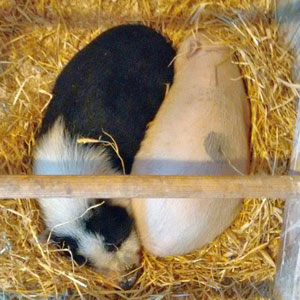 Did you know pigs are smart, industrious and affectionate?

The pigs at Safe Haven Farm Sanctuary are visitors’ favorites. They love having their bellies and ears rubbed; they are always curious about what is going on around them.

Recent scientific studies have confirmed that pigs are the smartest of domesticated animals, smarter than cats and dogs. Amazingly, pigs: 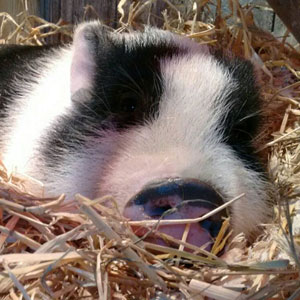 Leo in straw at Safe Haven

Many people adopt pigs as pets. They are easily house-broken and are affectionate – they love to climb on laps and get belly rubs. They can respond to human commands and will follow people on walks, happily wagging their tails. Some celebrities are photographed with “teacup pigs” as a fashion accessory because they are so cute. However, these “teacup pigs” grow into the pot-bellied pigs that are at Safe Haven (unless they are starved to keep them small) so many of these animals are abandoned as they grow bigger. Zoning laws prohibiting farm animals in towns result in other abandoned pot-bellied pigs.

In nature, pigs spend about 75% of their waking hours grazing, rooting, and exploring their surroundings. Pregnant sows will travel for miles to find the exact right conditions to build a nest for birthing. Some of them build two nests and then make a choice! Sows use twigs to carefully construct nests for their piglets. There has been no known case of a wild sow suffocating their piglets in these nests. They are constructed so if the sow accidently rolls on a piglet, the baby just falls through the nest and then joins the siblings for feeding [Stolba and Wood-Gush]. As they grow older, piglets join social groups to explore and play together.

Pigs in the wild will live for about 10 years. They will feed their piglets for about six months before weaning. They live in social groups and recognize up to 30 other individual pigs in their group. They even use sounds to communicate with each other. Pigs are clean animals and will move outside their nests and resting places for waste elimination.

Pigs’ genome is closely related to the human genome. We both have areas of hairless skin, heavy eyelashes, and protruding noses. New genetic analysis speculated that primates and pigs might share an evolutionary ancestor. Mother Nature Network said:

But it goes to show that our relationships to our animal brethren are often closer than first appearances may suggest. Despite the great diversity of life, there is a string connecting us all together — a string that geneticists are only beginning to learn how to unravel.

Did you know about the routine mutilation and slaughter of pigs?

In the US, over 100 million pigs are slaughtered each year for food. Despite the happy pigs shown on happy farms by pig producers, the reality is that:

Over 95% of pigs used for human food in the US are raised in factory farms, where they never see the light of day. To say that these farms keep pigs from exhibiting normal behavior is an understatement. Here is the brief life journey of a typical factory-farmed pig: 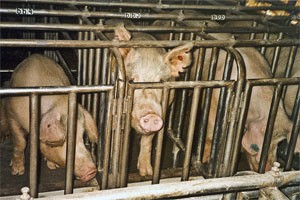 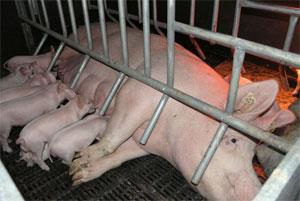 Sow and piglets in farrowing crate 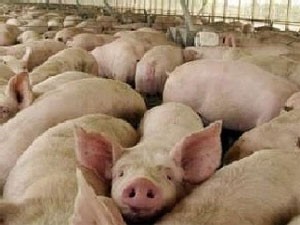 Pigs in shed at factory farms 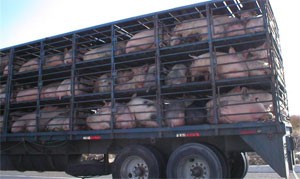 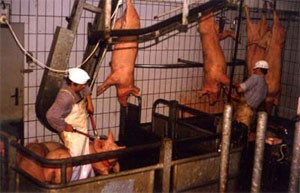 They are prodded onto a narrow walkway or chute, on which they walk single file to the killing floor. The animals at the rear of the chute hear the screams of the pigs ahead …. Farm animals are supposed to be stunned and rendered unconscious before they are actually killed. However, some pigs remain conscious when they are strung upside down by their legs in shackles and they kick and struggle as they are moved along the conveyor belt to have their throats slit. Because of the speed at which the animals are supposed to be stunned and killed, and because slaughterhouse workers are often ineffectively trained, a number of pigs may also survive throat cutting and remain conscious when they arrive at the next station, where they are dropped into scalding water – a procedure done to remove their hair.

All of this suffering of sentient, sensitive, curious animals occurs because people like the taste of bacon. 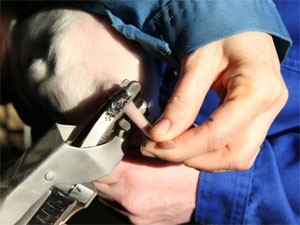 Even on small farms, tail docking, castration, teeth removal, nose rings (all without anesthesia) are common.

The Animal Welfare Institute sets standards for humane farming so pigs should be able to engage in behaviors that are normal, such as living in social groups and nesting. Despite these minimal standards, piglets raised for human food are:

Some small farmers send their pigs to the same slaughterhouses as factory farms. Others prefer to kill pigs themselves and believe the flesh tastes better when the pig is bled out alive. A slit throat or a gunshot to the head prolongs the painful death so pigs’ own hearts pump blood out of their bodies for humans to have better tasting meat

So, you can think you are paying more for humanely raised dead pigs (aka pork or bacon), but you are actually perpetuating the torture and slaughter of innocent, curious, intelligent animals. 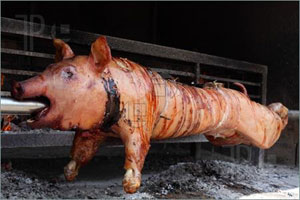 Eating pigs is not good for human health

Did you know eating pigs is not good for you?

USDA estimates the average American eats 51 pounds of pigs per year [Joy, p. 36]. We seem to love our bacon, sausage, ham and pork chops. However, dead pig flesh does not love us back. Here are some known health risks from eating pigs: 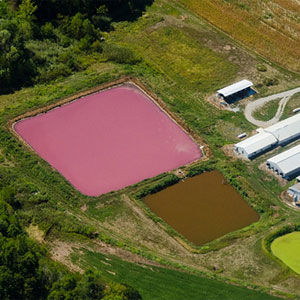 Did you know pig waste is a major source of pollution for our rivers and lakes?

According to the EPA, THE major source of pollution for our rivers and lakes is factory farm runoff (that is, the excrement and urine from factory farmed animals). This pollution is higher than all other sources of industrial pollution combined [Masson, p. 36].

In the US, human waste is carefully regulated, processed and monitored. However, no such standards exist for farm waste, which is 130 times greater by volume than all the human waste in the US. A typical pig farm generates as much waste as a city of 50,000 people. Here are some facts related to exposure to waste from pig farms: 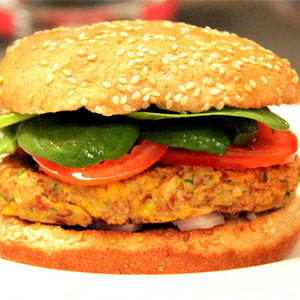 There are cruelty-free, plant-based options.

You make a choice every time you sit down at the table. That bacon that you are eating comes from a very sociable animal raised in brutal conditions and then killed inhumanely at a young age.