Sheep are social animals who live in herds. In the wild, they need a leader to protect them from predators such as mountain lions and wolves. In captivity, sheep are very unhappy when they are removed from their herd. On factory farms, they are often removed for shearing or slaughter. Here at Safe Haven Farm Sanctuary, many of our  sheep are shy and  happy being together but usually don’t approach humans unless you are very quiet. Over time, they are becoming more comfortable around humans. 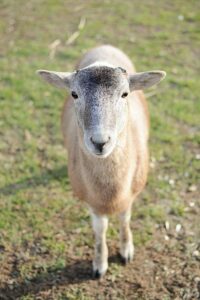 In August 2020, this tiny lamb arrived at Safe Haven weighing in at just 6 pounds and immediately captivated our entire staff with his deep brown eyes.  He was found by a family in Queens on an upstate New York farm.  The farmer had no idea where the mother was.  Our suspicion is that his mother had been sent to auction and the farmer didn’t realize she had a baby in the barn!  Thankfully, the farmer willingly let the family take the baby home and they soon brought him to Safe Haven along with several quarts of goats milk – believing he was a baby goat. We were suspicious that he might not be a goat and sent a photo to our vet who confirmed that the baby is a Katahdin lamb. This breed has hair instead of wool – the goal was to produce a meat sheep that did not require shearing.

We named him Shimon after a young animal rights activist who had visited our sanctuary and tragically lost his life a week before we rescued the baby lamb. 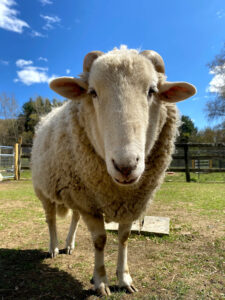 Clifford and his mom, Dorothy, barely escaped slaughter on a farm near Sleepy Hollow, NY.  They arrived at Safe Haven in May of 2013. Clifford has blossomed into a friendly and inquisitive boy who loves observing the activities in and around his barn and pasture.  He is the first one to come to visitors for attention.  Sadly, Dorothy passed away in July of 2022. We are grateful we were able to provide her with a lifelong, loving home where she was surrounded by an abundance of love, care and respect. 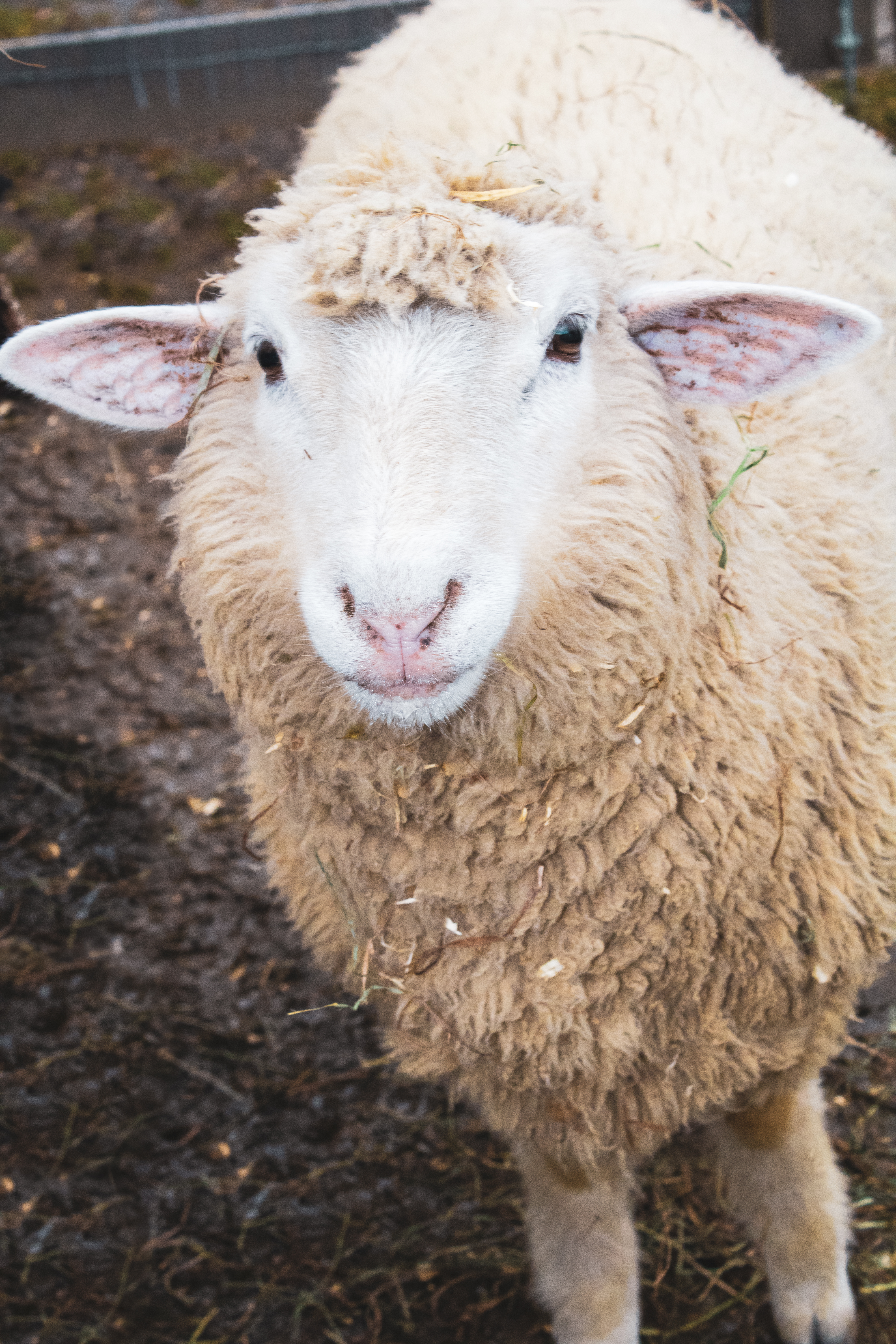 It’s difficult to imagine this sweet boy out in the world all alone, lost and crying out for his mother.  Police officers found Finn running down a road between Tivoli and Red Hook, NY.  After a thorough search for his original home yielded no results, Finn was temporarily brought to a 4H farm. The farmer provided Finn with food and shelter but really didn’t want to keep him.   A mutual vet reached out to us to see if we had room for him.  We welcomed Finn to our family in May of 2021.

Finn was incredibly thin when he arrived but all of his fluffy white wool hid just how skinny he was.  Soon, his wool began to fall off.  The vet told us this was due to the stressful circumstances he endured and malnutrition.  He also had parasites and that required prompt treatment.  At Safe Haven, Finn receives all the care and attention he needs to thrive.  He showed progress every day and his soft wool soon started to grow back.    He moved in with Dorothy and Willow and he happily follows his new adoptive family everywhere.   Finn is incredibly friendly and cute beyond words!  He loves to nuzzle with his human caretakers and it is absolutely impossible not to smile when spending time with him. 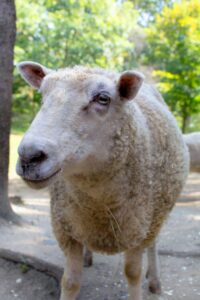 Jeremy had a very difficult start in life.  He came to Safe Haven in 2012 with his mother, Samantha, and his adoptive sister, Jillian. They came from an abusive farming situation in Western New York and were near starvation.  They survived the worst treatment their rescuers had ever seen.  When the precious sheep family first arrived at our sanctuary, they were understandably very afraid of humans.  We gained their trust with kindness and a gentle touch.  Jeremy is enthusiastic and inquisitive.  He is the first to approach visitors – especially if he thinks you may have a treat!  He enjoys spending his days exploring the pastures and relaxing in his barn with his sheep family. 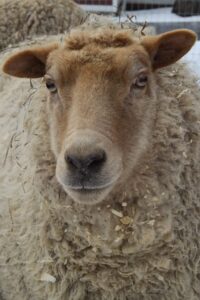 Jillian had a rough start in life. Along with Samantha and Jeremy, she was rescued from an abusive farming situation in Western New York and was near starvation. Jillian’s mom died, and she was in desperate need of the nurturing only a mother can provide. She attached herself to Samantha and Jeremy and wouldn’t leave their side.

These three precious sheep found their forever home at Safe Haven where they have been a family ever since.  Jillian enjoys her days exploring the pasture with her family. At night, they all snuggle up together, safe and secure in their barn. 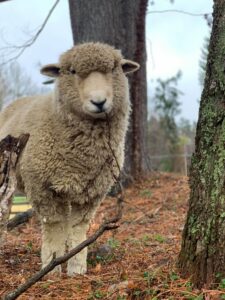 This precious little lamb was found in a field at a NJ production farm motherless, alone and crying.  A number of ewes had died in that field.  Even if Mack’s mom was alive, the moms and babies were not identified and there would be no way to reunite her with her baby.  Production farms are a place where animals have no names and are treated like products.  There was no interest in caring for this little lamb and he was given to a 4H farm where he would at least be fed.  That farm determined he was not a definite wool or meat sheep so, once grown, he would be sent to auction where he would have been sold for “cheap meat”.  A compassionate young woman happened to hear of little Mack’s harrowing journey and decided to take action! She advocated for him at every turn and convinced the farm owners to release Mack to her for the cost of the milk he had been given.  She then searched Instagram for a forever home where this lamb would be surrounded by the love, care and respect he deserves.  Safe Haven to the rescue!  In August of 2019, we welcomed this beautiful woolly boy to our family with open arms. 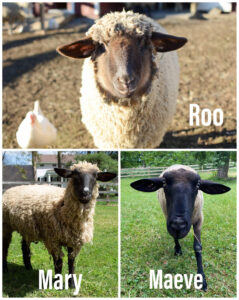 Mama Mary and Aunt Maeve were rescued from a meat farm by a well-intentioned woman who had neither the knowledge nor space to provide a proper home for them.  She cared for these precious ewes for nearly 6 months when she discovered they were both pregnant!  As soon as she realized that Mary was in labor, she called the vet, and soon after, Baby Roo was born.  The little lamb had some transient nerve damage but was thankfully able to nurse.  Just a couple of weeks later, Maeve sadly had a stillborn baby and another who, despite intense vet care, did not survive.  The vet suggested to the owner that the sheep would thrive at a sanctuary and would receive the care required to keep them happy and healthy. Safe Haven to the rescue! We welcomed this sheep family to the sanctuary in April of 2020. Baby Roo is sweet and friendly and Mama Mary is very protective of her baby.  Aunt Maeve is nurturing to Baby Roo and has become her “second mom” – proof that moms come in many forms! This beautiful sheep family is enjoying life at the sanctuary and receiving an abundance of love and care from our farm family. 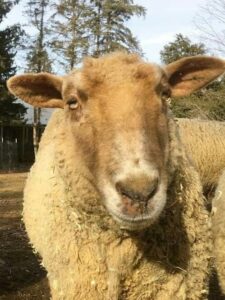 Sweet Samantha and her son, Jeremy, survived the worst treatment and starvation her rescuers had ever seen. In addition to caring for her son, Samantha adopted a baby lamb, Jillian, whose mother had died. They all arrived at our sanctuary very afraid of humans. Now, all of their interactions with humans are kind and gentle.

They enjoy spending their days exploring the pastures and lounging in their barn. We are so glad to provide Samantha and her children the free and happy life they deserve. 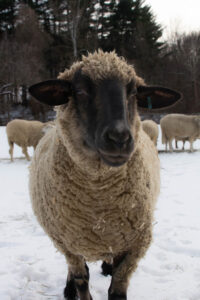 Satin was born on February 7, 2016 on a production farm. She was destined to be a breeder sheep or sold for meat. Her mom rejected her and broke one of Satin’s legs and a rib or two. The vet offered to take her home and care for her while her broken bones healed. The vet then contacted Safe Haven and asked if we would be willing to adopt her. We are so pleased this precious woolly girl is part of the Safe Haven family! 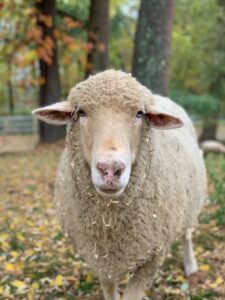 Villette was just four weeks old when he arrived at Safe Haven in the Spring of 2017. His mother had rejected him and a kind visitor to the farm where he was born took him home with her. She bottle fed him until she was able to find a more suitable home for the lovable lamb.  She contacted Safe Haven, and we were delighted to welcome this adorable woolly fellow to our farm family. He has grown into quite the handsome young sheep! He is friendly, playful and full of personality!

We welcomed Willow to our farm family in May of 2021.   She was just 3 months old when she arrived.  This courageous little lamb was found running for her life on the streets of Staten Island, NY.  She daringly escaped a slaughterhouse about a mile and a half away from where she was spotted.  A man from the area heard people in the street joking about her being “dinner”.   He knew he needed to get her to safety.  He and a friend managed to lasso her and brought her to a neighbor who had a nice fenced in area in his backyard where she they provided her with water and gave her some delicious hay to enjoy.  Within 24 hours, they found the perfect place for the little lamb…  Safe Haven to the rescue!   We are so pleased to welcome this beautiful woolly sweetheart to our family and so grateful for all those who helped get her to safety.  We named her Willow which fittingly means “freedom”.