Chickens are social animals who can recognize their friends. They are loyal to each other and have been found to be more intelligent than a three-year old human. A normal, wild hen will lay about 20 eggs per year, not the 260 eggs per year that she lays in captivity (with terrible physical results). Mother hens teach their chicks how to be chickens: how to dust their feathers to keep clean, where to find food, how to take a sunbath. She makes different sounds to alert her brood to dangers. The bonds she makes with her chicks can last a lifetime.

Compare this life to life at a factory farm for eggs, where 4-10 chickens are kept in a space the size of a filing cabinet. They cannot stretch their wings, they don’t have nests as a place to lay their eggs, and they never see sunlight. The stress associated with crowding and confinement makes the chickens peck at their neighbors and often cause bloody wounds. Farmers “debeak” chickens, cutting off the sensitive beaks and causing severe pain (similar to cutting of a human’s lips). Some of the chickens at Safe Haven have been debeaked at the factory farm they initially lived in.

We hope you get to spend some quiet time with our chickens. You will begin to notice that they have different personalities – each is a someone, not a something! 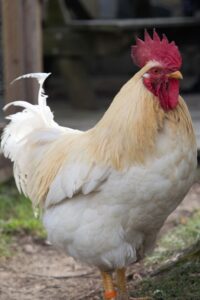 Bogie arrived in the Fall of 2016. He began life in a middle school hatching project. A teacher had ordered six fertilized eggs from a company to show students how chickens hatch and grow. But the teacher hadn’t thought about what to do with the chicks when the school year ended.

Fortunately, a parent got in touch with an animal lover who contacted our farm animal sanctuary, and we adopted the chicks. Although these chicks were lucky, most chicks raised in school hatching projects are destined to have an unhappy ending.

The schools are often unable to find anyone willing to assume responsibility for caring for the chicks throughout their lifetime.  Chicks are sent back to the company they were purchased from, and they are killed.  Parents should encourage their children’s school administrators to stop participating in egg hatching projects. 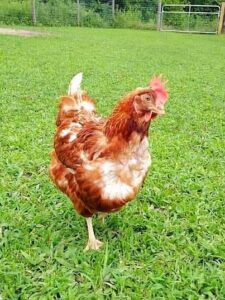 Brooklyn was discovered by a New York City officer who was making rounds to ensure group compliance with COVID requirements.  He took the hen to his home and contacted our sanctuary.  When he brought the hen to Safe Haven he commented that she hadn’t eaten since he rescued her.  We noticed that she was limping and after careful examination, we noticed a large swelling on her chest.  The vet drained a big abscess and found an old sewing needle lodged in the tissue near her ribs.  After 2 weeks of close monitoring and supportive care, we were able to take out the sutures.  Brooklyn is now eating well and enjoys her days exploring, foraging and taking dust baths with her new “bestie”, Rosie.  The staff describes Brooklyn as “gutsy and fearless”. 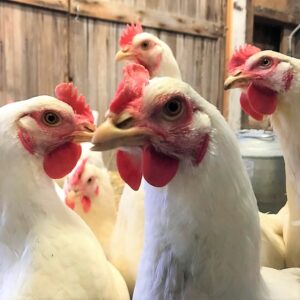 In April, 2018 we received an urgent email.  Ten young hens who had been used in experiments in a lab in Georgia were going to be euthanized if a home couldn’t be found by the next morning.  The lab had already euthanized some of the chickens who couldn’t be placed in time.  Time was running out and all the local sanctuaries were full.   We hurried to make them a cozy space. These hens have a zest for life and love interacting with our other animals. They especially love to hang out with the goats and go for rides on their backs. It warms our hearts to see them enjoying life on the farm. 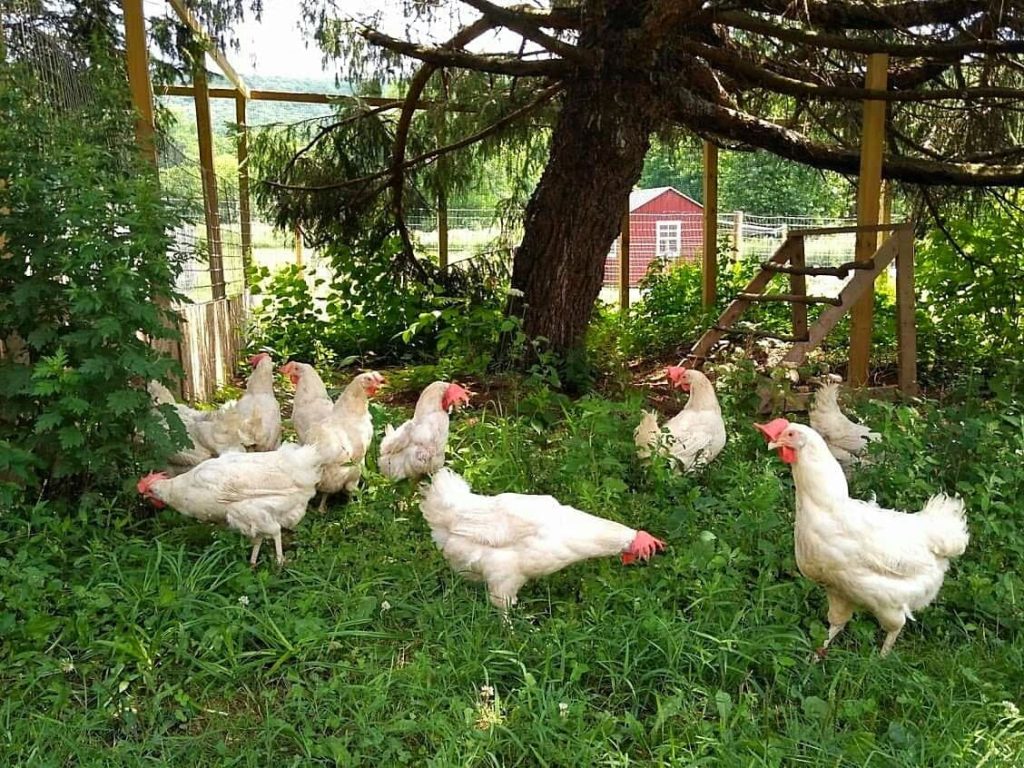 The pandemic caused a catastrophic reality for all farm animals. The closure of egg laying farms and meat plants due to the coronavirus means “depopulation and disposal” of millions of chickens and livestock using horrific and inhumane methods.   In June of 2020, we learned about a large CAFO going out of business in Iowa and the many egg laying hens residing there who needed help.  These hens live a life of torture spending their lives crammed in small battery cages until they stop laying eggs and are no longer “useful”.  With the pandemic, their demise was due to come even sooner with the sickening process to “mass kill and discard” these living beings.  Safe Haven joined the massive rescue effort by many sanctuaries across the country to save these hens. We stepped in to provide 17 of these hens with their forever home!  Due to the dismal life they endured, they require much rehabilitation. We are happy to report that they are enjoying their large aviary and the feel of grass beneath their feet for the first time in their lives. 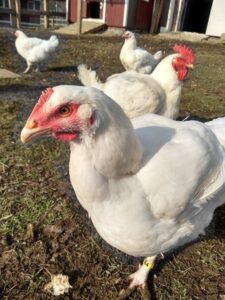 Lily is one of six sweet little white chickens came to Safe Haven in September of 2020 after being rescued from the Kaporos ritual in Brooklyn, NY.  They were tiny and very young, weighing only about 2 lbs each.  Although they had their adult white feathers, they “peeped” quietly like baby chicks.  Born on a factory farm in huge windowless sheds holding tens of thousands of birds, they were then transported hundreds of miles to Brooklyn.  They sat in packed trucks without food or water for a day or two before the ritual started.  They were fortunate to escape slaughter in the street.  At Safe Haven, they are living a free and happy life and will never know fear or pain again.  They are growing up fast and, as you can see, Lily loves the camera.  She is quite a beauty and loves to follow her human friends around! 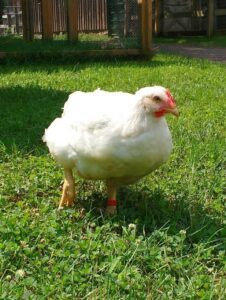 In July, 2018, a compassionate woman found this little hen afraid and alone on the Grand Army Plaza in Brooklyn, NY and knew she must have escaped a live meat market. She scooped her up and brought her back to her city apartment. Had she been left in the busy city streets of Brooklyn, she would have likely been killed in traffic or picked up by someone for their dinner.

The woman reached out to Safe Haven, and we opened our arms and our hearts to this sweet little hen.  Pepper will now spend her days exploring the farm, taking dust baths and enjoying life with her new feathered friends. 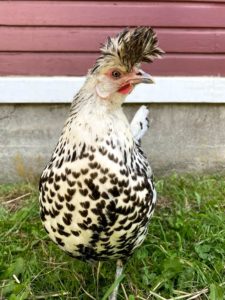 This stunning beauty is an Appenzeller Spitzhauben hen which is the national breed of Switzerland.  As you can see, Regina is quite unique and has a very fancy crest!  Spitzhauben means lacy bonnet in Swiss and derives from a ceremonial hat worn by the women in the Appenzeller region in Switzerland. Regina was found in a box by a young man jogging in a park in Patterson, NJ early one morning during the summer.  He took the sweet chicken home to his apartment and cared for her until he was able to find the perfect forever home for the sweet hen. Safe Haven stepped in and Regina is now enjoying life at our sanctuary.   She is a friendly hen who often amuses staff members by hopping onto a shoulder or and knee for a little TLC time! 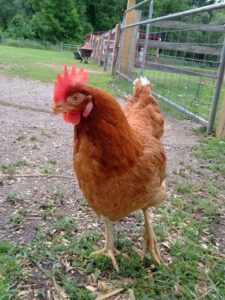 This little cutie was found by a young man on the streets of Brooklyn.  He took the sweet hen to his apartment to care for her but his landlord was furious. He told the young man he didn’t want “the dirty thing” in his building.  The man put the hen in a crate and kept her on the roof of the building but was quite concerned about her and started his search for an appropriate home. We instructed him to contact a bird rescuer in Brooklyn who could care for the hen until she could arrange transport to Safe Haven.  Rosie initially had problems eating and from her exam we feared she might have had a head injury.  With time and care she was able to eat soft food and then able to eat pellets and vegetables.  She is now venturing outdoors with her new hen friend Brooklyn who showed her how to enjoy pellets! 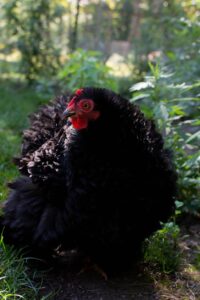 Sometimes farm animals come to the sanctuary, not from an abusive situation, but because their human caretaker realizes they just can’t protect their animals even though they love them. This was the case for Salem and 3 other sweet hens from a nearby county. They were cared for by a teenage girl who loved them very much.

However, a predator got into the chicken house and killed several of her hens. She decided to give up her remaining hens since she couldn’t adequately protect them.  Her unselfish and brave gesture enables Salem and her hen friends (Goldie, Chocolate Chip, and Chickpea!) to live a life free from harm here at our sanctuary.  Note that Salem is a “Frizzle” chicken!  The breed has characteristic curled or “frizzled” plumage!