↓ Skip to Main Content
Home › Farm Sanctuary News › Children and the Loss of Concern for Animals: Implications for War

Children and the Loss of Concern for Animals: Implications for War

At the beginning of the 20th century, several psychologists kept diaries of their children’s speech and conversations. One British diarist, James Sully, reported the following conversation. Sully’s 4-year-old son was looking at a picture book and asked his mother why people kill stags. She said it was because people like to chase them.

Although this conversation took place in England over a century ago, it illustrates feelings I’ve seen over and over. Children love animals and care deeply about them. For example, I often testify against hunting and have frequently watched children as young as 8 years old walk up to the podium and tell the officials that shooting animals would be terrible. Like Sully’s son, they don’t assume a difference between killing humans and killing non-human animals. They say things such as, You want to kill bears? That’s terrible! How would like someone to shoot a gun at you?, as if the Golden Rule applies to non-human animals.

Psychologist Peter Kahn interviewed children with respect to environmental pollution and found that children were frequently concerned about the effects on animals. Moreover, children at surprisingly young ages said animals have rights and deserve respect. They defended their views by pointing to commonalities between humans and other species, saying things like, Fish need the same respect we need. Fish want to live freely, just like we live freely. And, Birds have a life as we do, they have a mother, they are like us (Kahn, 1999).

Freud (1950) was among the first to comment that children, unlike adults, do not draw a hard and fast line between their own nature and that of all other animals. Children have no scruples over allowing animals to rank as their full equals (pp. 26-127).

The young child’s feelings for animals begin early. I am often struck how infants, at the age of about 11 or 12 months, squeal with delight at the sight of an animal such as a dog or a bird. They often want to touch or embrace the animal. On our farm, young children follow chickens and turkeys about, trying to pat and hug them. Sleep researchers have found that young children, between about 3 and 7, even frequently dream about animals. They dream about animals more than about humans or any other topic.

When I have reported these observations and research findings, people sometimes say, Yes, some children care about animals, but what about children who are very mean to animals? How do you account for that?

My guess is that these children are in a decided minority. I also suspect that even these children started off with a loving fascination with and caring attitudes toward animals but suffered such cruelty from adults that they began taking out their anger out on animals. This is, of course, a question for research.

In any case, somewhere between 5 and 7 years of age, the children who love animals experience a shock. At 5 years of age, it doesn’t seem to occur to them that adults would routinely eat animals.

Pavlakos found that children soon learn otherwise, most by the age of 6. She and others, such as Peter Singer and Jane Goodall, also have informally observed that many children become distraught and want to become vegetarians at this point, but their parents rarely permit it. The developmental psychologist Lawrence Kohlberg, who usually championed children’s independent thinking, spent six months persuading his young son to abandon vegetarianism.

From Caring Child to Detached Adult

It would be great to learn what goes on in the child’s mind at this point, when they confront the fact that most adults eat meat. It is probably the first step in a socialization process that lasts several years. The child, who cares deeply about animals, becomes a detached adult.

Gene Myers and others have observed a similar shift. Myers, who spent a year with children in a nursery school in Illinois, observed that harm to the animals provoked spontaneous and urgent concern. When a dead baby bird was brought to class, when the baby dove born in the classroom died, when the visiting spider monkey were confined to a cage: all these provoked concerned or even outraged responses from the four- to six-year-olds (Myers & Saunders, 2002). Adult responses, in comparison, were more jaded (Myers, 2007, Ch. 7).

How does this detachment develop? One way our society distances us from animals is through its language. It uses euphemisms. We eat pork, not pigs: veal not calves; meat, not flesh. When it comes to hunting, hunters and wildlife agencies consistently avoid the term “killing.” Hunters “harvest” or “take” the animal. The 19th century philosopher Arthur Schopenhauer pointed out that the English language distances us from animals by referring to them with the impersonal pronoun it, as if animals were mere objects.

Our society also teaches children that non-human animals are inferior to us. In fact, Western society has often maintained that we are so superior that we aren’t animals at all. We are unique and higher beings, with souls, created in the image of God, with powers of reasoning light-years more advanced than other species. In the movie Spartacus, the hero, when thrown into a dungeon with a woman for his pleasure, asserts his human dignity by proclaiming, I am not an animal. To call someone an animal is to insult him. President Trump recently created controversy he call Syrian President Bashar al-Assad An animal (Davis and Sanger, 2017).

So, if animals are such lowly creatures, we don’t have to worry so much about abusing and even eating them. We become detached.

Now I realize that many people say adult attitudes are changing. Writers such as Michael Pollan (2006) have said that animal rights is no longer on the fringe. Americans, Pollan has said, are increasingly aware of the plight of animals and are adopting vegetarian diets.

We don’t have lots of data on changing attitudes, but Harris polls indicate that the percentage of adult vegetarians in the U.S. continues to be small. The poll’s estimates were 5% in 2011, 4% in 2012, 3.4% in 2015, and 3.3% in 2016 (Herzog, 2016; Vegetarian Resource Group, 2016). Many adults care deeply about a few animals called pets, but I doubt that they lose much sleep about the treatment of others. True, in 2015 the shooting of Cecil the Lion in Africa aroused a good deal of public anger. Perhaps adult attitudes are finally starting to change. But here, too, we need research,

Implications for Human Abuse and War 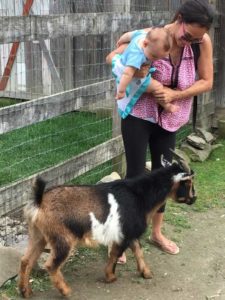 It is not clear at what age children learn to apply in-group/out-group thinking to different humans, such as ethnic groups. But I bet that once dichotomous thinking begins with respect to human vs. nonhuman animals, dichotomous thinking takes a pretty firm hold on the child’s mind and contributes to similar thinking with respect to humans alone. That is, the child finds it relatively easy to value his or her human in-group over human out-groups.

This dichotomous thinking facilitates killing during war. In war, our side consists of self-sacrificing, freedom-loving people, while the enemy out-groups are dismissed as contemptible. They are called Gooks, Slopes, savages, evil-doers, sub-humans and animals (Sion, 2017).

In survey research following 9/11, political scientists Cindy Kam and Donald Kinder (2007) found that people prone to this kind of dichotomous thinking tended to give greater support to the war on terrorism. As Kam and Kinder reported, Americans who believe their own group to be superior to others are also inclined to say that we should be spending more on homeland security, on keeping our borders impregnable, and on building a strong national defense. They want foreign aid cut (p. 328).

As the biological sciences have advanced, it become increasingly clear that in-group/out-group thinking is spurious. The great 20th and 21st century discoveries in genetics and microbiology point to the basic unity of life.

Recent genome research indicates that when it comes to DNA, we humans differ from one another by a mere one-tenth of one percent. Genome research also suggests surprising similarities across species. Human and chimpanzee DNA, for example, appears do differ by little more than 1 percent.

Moreover, researchers have found that all living organisms use the same genetic code and synthesize proteins with the same amino acids. People who separate humans into different categories, or draw sharp distinctions between humans and non-humans, are creating questionable social constructions (Smith, 2004; Crain, 2014, p. 114).

Meanwhile, contemporary animal researchers are finding that humans and non-human animals are more similar in their behavior than scholars once supposed. It was once thought that only humans make tools, possess culture, engage in symbolic thought, mourn the death of loved ones, or exhibit altruism. But one by one, these capacities have been observed in non-human animals as well—and often to surprising degrees (Crain, 2014, p. 86).

Scientists are finding, as young children have long known, that that living beings are all one. Perhaps if adults understood this, they wouldn’t be so inclined to engage in the kind of in-group/out-group thinking that supports cruelty and war.